SEMA Feature of the Week: 742 Marketing Goes Big at SEMA 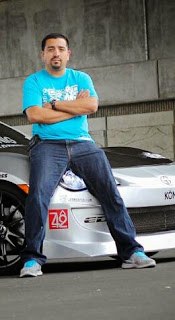 Jeff Maldonado is a busy man with one eye aimed towards the future. As President and CEO of 742 Marketing, he’s a force to be reckoned with among car builders at SEMA, national-level car shows and beyond. It all started in room 742 at Westwood College back in 2001 amongst seven college friends with a passion for the automotive lifestyle. Since then Maldonado has become the last man standing and worked steadily at growing the company into what it is today. His hard work and perseverance paid off; he recently made the cut as one of SEMA’s prestigious “35 Under 35” young rising stars and shows no signs of stopping. 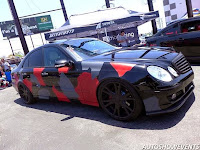 AMSOIL was approached by Maldonado in 2012 with some of the most impressive SEMA project vehicles we’ve ever seen. We hooked him up with some product, and then marveled at the end results when we saw what he was working with up close and personal. For SEMA 2013, the AMSOIL and 742 Marketing partnerships expanded with 20 show-stopping vehicles running AMSOIL and bearing the logo. Even at a show the magnitude of SEMA, 742 Marketing rides always manage to catch the attention of spectators constantly surrounded by eye candy. We caught up with Maldonado as he was tying up last-minute SEMA preparations, gaining insight into the mind of the man who knows his way around an industry full of cutthroat competition. How did he get there? His motto says it all: #DOWORKSON.

AMSOIL: Why do you think SEMA has become such a destination for vehicle builders like yourself?

JM: As a builder, a driver & enthusiast the SEMA Show has become more than an exhibit to display our work; it’s now an outlet to meet new clients for our business. Getting chosen by such companies like AMSOIL to feature at the show is such a privilege and accomplishment to a hard work that goes into building a show/race/exhibit ride. The SEMA show is not a destination...it’s a builder’s ultimate goal to be able to attend.

AMSOIL: It’s hard to stand out among all the impressive show cars at SEMA and on the car show scene. How does 742 Marketing manage to stay ahead of the game?
JM: "If you don't look ahead you won’t get ahead"- Jeff M. That'S our staff's mentality in this game. Being able to be different in our builds, our crew, our styles and the way we market our vehicles is what makes us different. Keeping positive and not letting the negative get to us is what puts us one step ahead. It's not always about the car.....it's the driver and what drives us to stand out. 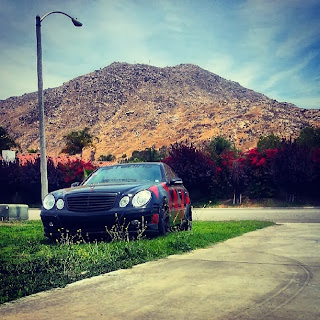 AMSOIL: What made you choose AMSOIL as the go-to lubricant for these high-performance, high-profile cars? Any favorite product?
JM: This is our 3rd year working with AMSOIL and we haven't heard any complaints from their sponsored rides. AMSOIL is a company that understands our marketing efforts and knows the amount of work and exposure that comes from our builds in the show scene. That only puts us in position to represent AMSOIL 100% not only at SEMA, but throughout the year. All AMSOIL products are and have been the best.... but if we had to pick 1 it would have to be the synthetic oil.

AMSOIL: You see a lot of amazing show-worthy cars in your daily job. Any stand-outs or all-time favorites?
JM: In the 5 years we have been doing this we have encountered some clean, mild and just out of this world builds, but the builds that have made the most impact for 742 and its movement have to be: SEMA 2010 both Widebody tC's, SEMA 2011 Sonoma truck with Chrysler 300 front end, SEMA 2012 KONIG FRS - TEAM REVO'S CARBON Z - FUSCION'S SCION IQ. As for 2013…you will need to wait till SEMA to see what we have in store.

AMSOIL: We're looking forward to it! If you could choose any vehicle in the world to customize and make your own, what would it be and why?
JM: A long time goal for me personally has to be a Maserati. 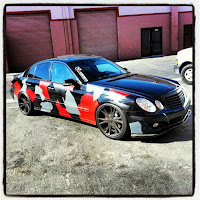 AMSOIL: What do you consider your biggest accomplishment in the “automotive lifestyle” realm you’ve created?
JM: That's a trick question (laughs). I have a few but in different aspects of the word. Business-wise I have to say being awarded the SEMA’ 35 Under 35’ award has been my biggest accomplishment. Personal-wise I have to say creating a good track record of my work that has led to the awards the cars and the future of the Lifestyle brand.

AMSOIL: Lastly, do you have a favorite quote or motto that describes you?
JM: Yes! #DOWORKSON

AMSOIL can be found installed in the following 742 Marketing show cars headed to SEMA 2013.

Stay tuned for photos and updates from the SEMA show floor, and come visit AMSOIL booth #24661 if you are attending SEMA 2013.
Posted by AMSOIL INC. at 10:09 AM