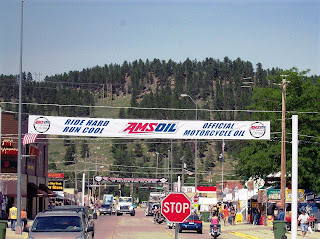 The 2008 Sturgis Motorcycle Rally has now come and gone, but what an event it was. Being “Official Oil of the Sturgis Motorcycle Rally” gave AMSOIL a lot of additional visibility this year. Enthusiasm for AMSOIL products continues to bust through the roof. The traffic in the corporate booth was great as many new leads and customers will be linked to the AMSOIL Dealer network.

The weather was hot in the beginning of the rally but pleasant overall with temperatures in the high 80s and low humidity for most of the rally. Many rally attendees stopped by the AMSOIL booth to sign up for a chance to win a free case of oil and filters for their bikes. This generated a great deal of interest and a reason for people to stop by. We also displayed an HDT Diesel motorcycle, drag bike and hill climb bike in the AMSOIL booth. All of these bikes stopped people in their tracks and provided more reasons to visit. 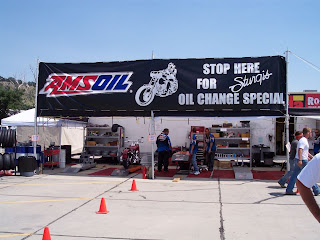 For the second year, AMSOIL sponsored the “Rumble in the Hills” hill climb and once again it was a huge success. Hundreds of spectators watched as riders climbed straight up the hill. AMSOIL also provided a free case of oil to the winner of the AMSOIL “King of the Hill” shootout. This shootout involved the top five riders from the two day event. They each raced the hill an additional two times to be crowned the AMSOIL “King of the Hill.” One never knows where you’ll see an AMSOIL banner in the media or on YouTube, especially with MTV and the Discovery Channel on hand taping these races.

Many times, AMSOIL staff walking in downtown Sturgis with their AMSOIL shirts proudly displayed were stopped by people saying things like, “AMSOIL, great stuff! “AMSOIL, I run it in all my toys!” “AMSOIL is the only oil I use.” Moments like these are especially gratifying.

AMSOIL looks forward to the 2009 Sturgis Motorcycle Rally and to promoting AMSOIL even more. It’s just one more reason AMSOIL motorcycle oil sales continue to soar. Now, it’s on to Daytona as the “Official Oil of Daytona Bike Week.” See you there! 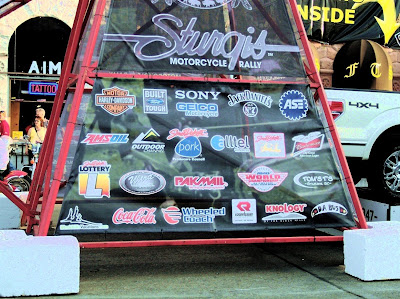 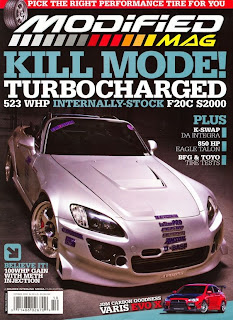 Congratulations to Huy Nguyen, whose '02 Honda S2000 is featured on the cover of this month's Modified Magazine. Spiffed to the hilt with a full array of engine modifications to its F20C 2-liter VTEC engine, Nguyen had to bounce back from a painful setback when the original Civic he'd intended to modify got stolen right in front of his home.

To his credit, the Virginia native poured his energy and passion into the s2000 featured in the magazine. Holding back nothing, he gave attention to every detail, inside and out, including the all important AMSOIL lubricants which keep this very hot car running smooth and cool.

Full feature story in the October issue of Modified.
Posted by AMSOIL INC. at 9:53 AM No comments: 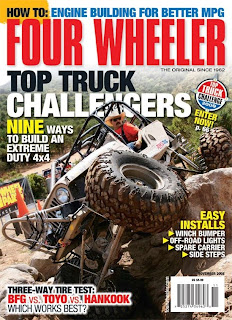 One of the highlights of the year for Four Wheeler Magazine's editors and publishers is the annual Four Wheeler Top Truck Challenge. Vehicles and drivers from all across North America descend upon the outback of Hollister, California, for the most grueling competition on four wheels. A dozen reader selected teams make their appearance here and it is a wonder of devastation for many.

AMSOIL is pleased to sponsor events like this that put equipment to the test. It’s where our products excel.

The November issue of Four Wheeler magazine, with full coverage from Hollister, is now on news stands everywhere fine four wheeling mags can be found. Here’s the cover shot. Enjoy the contents and the competition. When you go on the ride of your life, be sure to protect your engine and other moving parts with AMSOIL engine oils, filters, tranny fluid and gear lubes. We don’t, however, have anything that will keep your sheet metal from being stripped, yet.
Posted by AMSOIL INC. at 2:28 PM No comments: 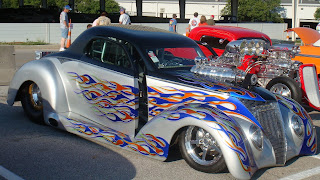 Paul Sykora's pet passion has been making the rounds. In July the ’37 Ford Coupe, which won a 2007 Hot Wheels Design Award, was displayed at the GoodGuys Nationals in Columbus. Paulie put together a nice sign listing all his sponsors with a full color AMSOIL logo prominent. We like that kind of appreciation.

From there, the Coupe was transported to the NSRA Street Rod Nationals in Louisville KY, a highlight among the 10711 cars there. To many, the coupe was the hit of the show. Among the photos here we see a camera crew interviewing Sykora for their video and Street Scene magazine. 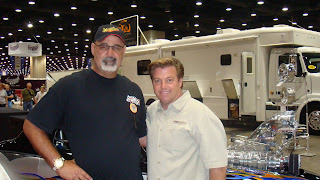 Sykora's email to AMSOIL, describing the photos he sent us, included this comment: "The last one doesn’t need a caption. It's me and Chip Foose standing next to the car, which he liked by the way." We're sure he did.
If you wish to see this work of art and engineering in person, the car is scheduled to be in Florida the rest of the year. You will find it at the Daytona Dream Cruise in Oct, the NSRA Nationals in Tampa (also October), and the Turkey Rod Run in Daytona in Nov.
Posted by AMSOIL INC. at 9:05 AM No comments: 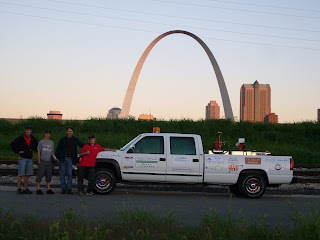 A group of Rhode Island students, under the guidance of science teacher Ross McCurdy, have undertaken a cross country journey called the Coast to Coast Biodiesel Pickup Project. Inspired by Charles Lindbergh’s solo flight across the Atlantic, the Ponaganset High School Alternative Energy Team chose a westward route, driving the entire way to California without refueling, using only the biodiesel they could carry on board their pickup.

When McCurdy first contacted AMSOIL for assistance he wrote, "We are doing this to promote biodiesel and other renewable energy by driving an American vehicle capable of safely and reliably making the trip. Our diesel pickup is similar to the majority of personal diesel vehicles used in the United States; it will be great to have more of these vehicles using American made biodiesel."

He added, "I've been using AMSOIL in my own car since new in 2002 and it runs great. Getting the best fuel economy and miles between oil changes are very important for our trip, which is why we want to run AMSOIL in our biodiesel pickup. Brandon Irons at AMSOIL was a big help today in recommending AMSOIL in the transmission and differentials, as well as the motor, to get the best mileage."

According to the Ponaganset Alternative Energy Team’s website, “Biodiesel is typically produced from plant oils such as corn, soybean, canola etc. and can be produced from fresh plant oils or from used cooking oils from restaurants such as fast food, Chinese, etc. Using the magic of chemistry, the oils undergo a chemical change called transesterification that removes the glycerin and thins it out so it has a lower viscosity and flows pretty much like regular petroleum diesel. There are a few big words here but it isn’t rocket science. The basic chemicals needed to make biodiesel are Sodium Hydroxide (NaOH, aka Drano) or Potassium Hydroxide, and methanol, which is used as go-kart fuel. It isn’t unusual for people to make home brewed biodiesel in their garage. A heads-up warning, KOH and NaOH are both caustic, which means they will burn things like skin and eyeballs (that is how Drano unclogs drains) and methanol is flammable and poisonous. Methanol is a different type of alcohol than the Ethanol found in beer, wine, and used in flex fuel vehicles. If ingested methanol can cause permanent blindness and death, so don’t drink it and don’t smoke while making biodiesel or working with any type of fuel. It is also good advice to not smoke at all ever, since it is really bad for the health all by itself.”

The Biodiesel Pickup they are driving is a 1997 GMC K3500 fuel injected, automatic transmission, 6.5L turbo-diesel with a six passenger, four door crew cab, an 8 foot pickup bed, and four wheel drive. The journey began this past Friday at 9:30 a.m. with fanfare from friends and family, plus media coverage. The final destination is Surfrider State Beach on Pacific Coast Highway 1 in Malibu. 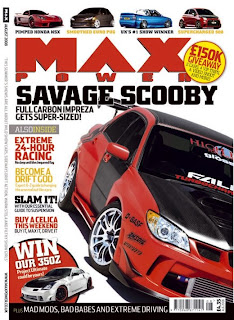 Nice to see this very sharp AMSOIL lubricated 2005 Subaru WRX STI made the August cover of Max Power UK. The AMSOIL brand is gaining visibility around the globe.

At a recent SEMA Show, the author of this blog rode to the airport in a taxi with a former racer from Belgium who used to fly to London to get his AMSOIL products. the stories are varied, but contain a common theme. The products are great and greatly desired.

Stephen Ng built this 400 plus horsepower Flat Red STI for the SEMA Show last year. It was located in the Seibon booth and now has graced two covers for us here at AMSOIL. He runs AMSOIL 20w-50 Synthetic Oil, Ea Oil Filter, DOT4 Brake Fluid and Antifreeze.

Ng learned how to do modifications by reading tuner zines. In 2005 when Stephen purchased his new ride, he knew there would be bright future for him and his new found pride and joy. The first modification he made was adding the M-Sports Widebody kit. Stephen chose a bold custom flat red paint, accented by a Seibon carbon fiber hood, doors, roof and trunk. Stephen and his STI got lots of recognition at the Seibon booth at the Sema Show in Vegas.

Under the hood, Stephen installed a Zerosports air intake, Tanabe full turbo back exhaust stem, Mishimoto radiator, hose kit and fans to complement the already sleek design of the engine bay. With each additional modification this car was destined to be a legend in the tuner scene.

No tuner build is complete without AMSOIL synthetic lubricants and performance products. Nice piece of work, Mr. Ng.... and best to you in all your future builds.
Posted by AMSOIL INC. at 10:14 AM No comments: