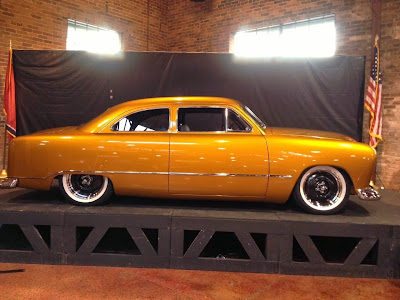 Word on the street is that the 2013 Street Rodder Road Tour '51 Ford has finally returned to its roost after a summer of logging over 16,000 miles. The AMSOIL Road Tour Chauffeur Jerry Dixey once again led eight individual tours to various events and the kind of bucket list sites that street rod enthusiasts only dream about.

It should be noted that Jerry Dixey may look like he's living the dream as he leads various groups of Road Tourians here, there and everywhere. But it's not a totally carefree existence. There's a heckuva lot of work that goes on behind the scenes as he prepares routes and destinations and lodging and food stops for every one of these tour legs. He really never rests because he also has to stay attuned to potential road construction detours and other unexpected diversions along the way.

On the other hand, this guy sure has driven some spectacular vehicles over the years. And he’s done his fair share of travelling as well, beginning with a hitchhiking road trip to Woodstock for that Summer of ’69 spectacle way back when. No doubt he’s already sifting ideas for his next adventure. 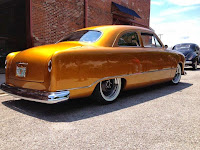 For the record, Jerry managed to average 25 mpg with this year’s AMSOIL Street Rodder custom Ford featuring the new Ford EcoBoost twin turbo V-6 from Ford Racing and Performance. The car was built by the crew at Honest Charley Garage with a Fatman chassis. The sprayed on PPG Golden Dream gold was applied over an extensively modified sheetmetal body. This fabulous car will be on display in the outdoor Foord Racing Booth at this year’s SEMA Show.

And while you're there, stop by the AMSOIL Booth and visit with us as well. Booth 24661.