The builders who assembled at UNOH this past week for the AMSOIL Engine Masters Challenge each arrived with different aims. Many to experience the challenge, others to show their stuff, and some to match wits with the best of the best. A half dozen made it to the final six in the quarantine, five survived the cut to compete on Day 5. Only one would take home the title Engine Master. And in the end it was Jon Kaase with a Ford Mod motor powered by a FAST XFI 2.0 EFI system. It was a thing of beauty to look at and a beast on the dyno.

These are veterans who know how to make a machine hum. They're also friends who watch each other and fine tune their skills for the future.

A lot of the builders specialize in certain kinds of engines. After his final run we Jon Kaase about the motors he builds and if he has a favorite as well as his motivation for selecting the Ford Mod motor.

"To be honest, some engines are popular for a while and then they’re not so you better have a wide range of things that you can do because the bills still come. You might like to work on top-end stuff everyday but it might not come in every day," Kaase said.

"I’ve never worked on a mod motor and I don’t know if I’ll ever work on anymore, but the only reason we’re working on that mod motor now is that by the rules it looked like the most competitive piece. There’s a pretty big carat out there this year and we’re not screwing around this year, we’re wanting to win. There’s been years we always wanted to win but we might have picked a Pontiac or something else and come to have a good time. We’re trying to have a good time but we’re trying to win this one."

That afternoon, checks were awarded to the top three. Jon Kaase achieved the goal he'd set for himself, and compensated accordingly with a check for $66,500.00. Congratulations, Team!

This event would not have been possible without the wonderful assistance of the University of Northwest Ohio, the staff of Popular Hot Rodding and all the great teams of builders who make this event such a highly regarded event. 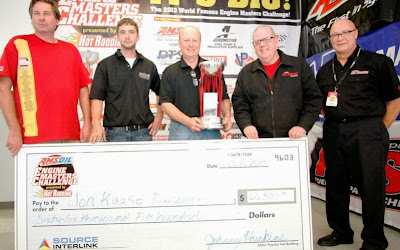