Dream Cars Get Dreamier With AMSOIL 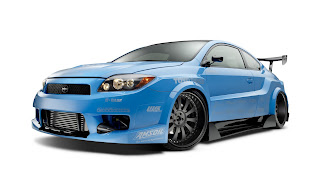 You can hardly turn around without running into a car show these days it seems. This week both Houston TX and Harrisburg PA are hosting auto shows. Some very hot AMSOIL lubricated vehicles can be found at each.
But first it only seems right to highlight John Pangilinan’s Scion, which had a featured location at the king of car shows in Detroit a couple weeks back. The cobalt blue Scion first appeared at SEMA in November and was also spotted at the L.A. Auto Show later. It's one beautiful car that is catching a lot of eyeballs. 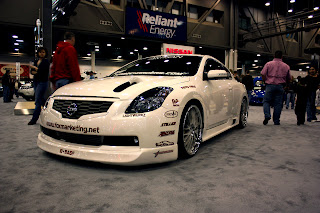 In Houston you'll see some pretty snappy AMSOIL lubed cars including this Twin Turbo Lexus IS-F put together by Fox Marketing and Artisan Performance. This subtle, yet aggressive, golden gem includes several muscular bodywork lines. The Nissan booth features another miniature miracle tuned by Artisan and Fox, a white 2008 Nissan Altima Coupe. And according to an informal survey of passing eyeballs, it's even more exciting than the new GT-R. Maybe because it's dressed for the occasion, and lubed with AMSOIL. 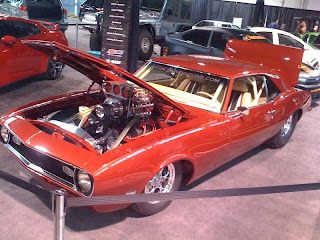 In Harrisburg, Paul Caparello’s ’68 Camaro is a power mad example of emotional exuberance. The current version of the car is 1800 horsepower. The previous alcohol injected version threw off 3500 horses. Both expressions of the Camaro were lubricated throughout with AMSOIL synthetics. 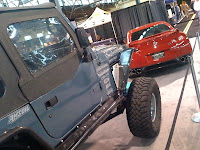 To the left here is a Jeep Wrangler TJ and in the CarDomain.com booth (below) a sweet Ford Focus. 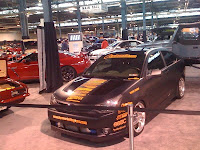 Tomorrow will be a big day in Harrisburg where they will be announcing the winner of the “Xtreme Ride Revamp” contest, in which some lucky person will drive home with the 2009 Honda Fit we mentioned yesterday. In the hands of Brian Fox of Fox Marketing and his team, the revamped ride went from stock to cream-of-the-crop in just over eight weeks. The Pennsylvania Auto & Boat Show, Faulkner Honda and HOT 92 FM teamed with the local car builder to create “somebody’s dream car”…but just whose dream car it will be remains to be seen.
CLICK ON IMAGES TO ENLARGE
Posted by AMSOIL INC. at 1:31 PM No comments:

AMSOIL and Honda a Perfect Fit 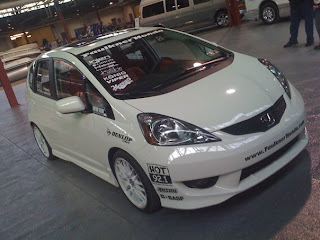 AMSOIL has partnered with Fox Marketing to lend support to a promotion in which one lucky winner will drive away in a 2009 customized Honda Fit. A promotion created by Motor Trend Auto Shows, the winner of this vehicle will be announced on January 30 at the Xtreme Ride Revamp event in Harrisburg, PA. This contest is being produced to give back to the community, and show support of the local tuner scene. The Honda Fit was donated by Faulkner Honda in Harrisburg, with the customization designed and coordinated by Brian Fox of Fox Marketing.
"My favorite part of this whole promotion is just seeing someone really appreciate all the hard work that goes into building a car. Someone might be in hard times and really need a car, and it is all about giving back at the end of the day. No money can be put on changing a person’s life!" says Fox. "I'm very honored to work with AMSOIL and their commitment to the performance scene. We see value in the synthetic product line as now a person only needs to change their oil once a year instead over every 3,000 miles. AMSOIL was the right ‘fit’ for this project with their high quality products and value!" We agree.
Fully equipped with AMSOIL lubricants throughout, this ride features an Injen/AMSOIL Intake System as well as custom paint, interior, suspension, sound system and more. Needless to say, the winner of this vehicle will own a unique ride unlike any other.
Posted by AMSOIL INC. at 2:45 PM No comments: 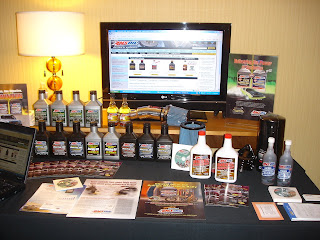 It was a big day in Washington D.C. today as a new president was sworn into office, and hundreds of millions from around the world watched the peaceful transition of power. Former presidents, vice presidents and other dignitaries were on hand for the historic gala occasion.

On the West Coast another gathering was taking place which, though smaller in scale, is designed to be influential for many companies in the auto industry. AMSOIL representatives were on hand again for the 8th annual MPMC Media Trade Conference. The Motorsports Parts Manufacturers Council (MPMC) is a subdivision of the Special Equipment Manufacturers Association (SEMA) which was established to raise public awareness for motorsports, one of the nation’s leading industries. The MPMC event strives to achieve this goal by bringing editors and manufacturers together for the purpose of educating influencers and increasing understanding through dialogue.
AMSOIL considers it a privilege to be involved with this elite group for the three-day event held at Embassy Suites LAX South in Los Angeles. Manufacturers from all over the globe gather for a series of face-to-face meetings with publishers, editors, and media reps from the leading consumer and trade publications. 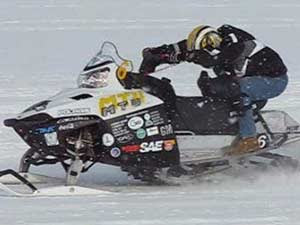 Nowadays, people everywhere in every way are looking for ways to go green. This includes more than 150 engineering students from seventeen universities nationwide participating in the 2009 SAE Clean Snowmobile Challenge. Hosted by Michigan Tech University, this year’s theme is “Flex Fuel.” The event spans six days in March 2009. Students compete in one of two categories, taking a stock snowmobile and reengineering it to reduce emissions and noise while maintaining or improving performance. Finalists compete in a variety of categories including emissions, noise, fuel economy, acceleration, handling, cold start and design. Overall, each team aims to make a better sled that has less impact on the environment.
The first category includes sleds driven by one Internal Combustion (IC) engine, and those in the second category are sleds driven by electrical power with Zero Emissions (ZE). These snowmobiles must be built to meet or exceed the 2012 standards for exhaust emissions and noise output. Furthermore, they must run on bio-fuel only. This creates quite the challenge for these students, and lots of time, research, and ingenuity goes into each project. AMSOIL is very pleased to be associated with these future engineers of America as they look for solutions to better the future of snowmobile design.
The event is hosted by Michigan Tech, and will be held March 16-21 2009 at the KRC Keweenaw Research Center in Houghton, MI. Upwards of 1,000 spectators are expected, and the public is invited to attend any of the competitions. If you can make it, also check out the Polaris Acceleration Event and Polaris Objective Handling Event on Saturday the 21st on the KRC test course. AMSOIL will update the promotions blog with further information as it becomes available, so stay tuned.