Scott Hubbard knew his 2010 Mazda3 I-Sport would be his first project vehicle as soon as he laid eyes on it in 2009. After purchasing his own at the end of that year, Scott set out to create a unique second-gen Mazda3 unlike any other on the car show scene. He succeeded, and now boasts ownership of a tricked-out Mazda3 sedan with modifications not seen on any other of its kind. Testaments to his hard work are the best-of awards he holds from Hot Import Nights Fontana, MazFest and Extreme Autofest San Diego 2013.

The list of mods is extensive, but one that immediately catches the eye is the Vertical Doors Inc. kit installed on the vehicle. To this day, it is still the only second-gen sedan in the country with this particular modification. The tuner scene is rampant with builders constantly on the grind trying to create the next big thing, and Scott has found a way of standing out among them.

Scott’s Mazda3 is now headed to SEMA for the first time, slated for a feature vehicle spot for the SteelCraft Company. In keeping up with his commitment to performance and style, AMSOIL is installed throughout. We caught up with Scott as he prepared the finishing touches before SEMA kicks off at the end of this month, and here is what he had to say.

AMSOIL: What drew you to this make/model for SEMA? What has you ‘jazzed’ about this particular build?

Scott Hubbard: I had always wanted a Mazda for my next car. I decided to go out one day and test drive some with my mom and wound up buying a 2010 Mazda3 I-Sport Sedan that same day, I had no intentions of mod’ing the car when I bought it. It wasn't until I started working for Vertical Doors Inc/ShopSFM, that I started mod’ing it. There weren't a whole lot of sedans being heavily modified, so there wasn't much to reference from. But seeing that no one had really touched the platform I decided to put my own spin on a car you typically wouldn't see at Shows. I'm jazzed about my build because nobody has a sedan quite like mine, and it’s so unique that if you saw it on the road you would instantly know that's the Mazda Project Car.

How many times have you been to SEMA?
SH: I have been to SEMA once before as a spectator, but this year will be the first time I have shown the Mazda Project car at SEMA. Going as a spectator and just seeing the event is what gave me the drive to do everything I could to get it into the event this year.

Why do you think SEMA has become such a destination for vehicle builders like yourself?
SH: When I think of SEMA I think of it as the Hall of Fame of show cars. It is not only a chance to show off all the hard work put into cars by their builders, but also a great way to get free parts in the process. 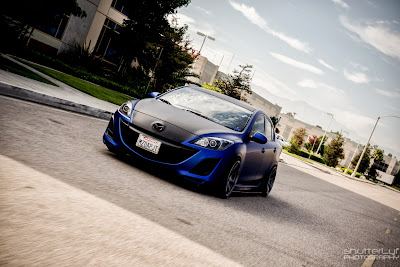 SH: I want to say the most unique features to the project car would be the prototype Vertical Doors Inc. Kit, the HEXIS Satin Metallic Blue/Matte Black two toned vinyl wrap and the Oracle angel eyes. These three mods are what make the car truly unique and express my personality. My goal was to make a car that stood out from the crowd, and I feel these three mods helped accomplish that.

What made you choose AMSOIL for your engine?
SH: I chose AMSOIL because when I think engine fluid I have always viewed AMSOIL as being one of the top of the line products you could use on your vehicle. I was interested in being a part of the AMSOIL experience and repping you guys at SEMA!

If you could choose any vehicle in the world to customize and make your own, what would it be and why?
SH: I have always loved the 1993 RX-7 FD and am planning on buying the next generation Mazda RX-7 whenever it finally comes out. When I think imports I think RX-7. While I am still a huge fan of the Nissan GTR, I am a Mazda Enthusiast at heart and would feel at home driving around in a RX-7 FD or Future generation RX-7.

Lastly, do you have a favorite quote or motto that describes you?
SH: If you can dream it you can do it! 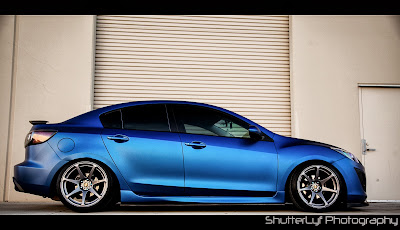