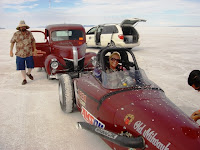 Tuesday there were delays on the course due to some accidents and some salt surface repair. A Colorado driver was seriously injured when his car begin sliding sideways at 170 mph and then went airborne, crashing hard on its side.

As a result of the delays, the AMSOIL/Coddington car only had one attempt on the track.
The record Jo is chasing is for the fastest pre-1934 roadster, 3 liter/blown gas/modified. The current record is 199 MPH.
According to our man on the scene, "Everyone is still in great spirits and hoping for a good day on Wednesday. Still very hot." You can see from this shot below what they mean by hot. Now imagine being wrapped up in a driver's suit.... 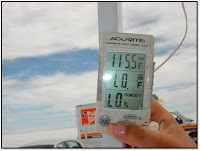