Setting records at Bonneville is a little more complicated than a Sunday walk in the park. To capture records with real bragging rights involves meeting a number of qualifying criteria. This is one reason it takes a whole week to get in the record books. And this year, with a record number of vehicles showing up to participate, the lines are longer to get on the course. An estimated 520 drivers have shown up for this year’s 59th running of Bonneville Speed Week.

Wednesday Jo Coddington made progress toward the goal with at least two decent runs. But due to the complicated licensing and scoring methods, the AMSOIL/Coddington 1927 Roadster still needed another run to qualify Jo for the main course, then two runs within a 24 hour period over 199 MPH to become the record holder.

Late Wednesday afternoon the AMSOIL/Coddington camp celebrated the week on the flats with a hospitality party. Everyone ended the day in high spirits in hopes that starting early the next morning everything would come together. 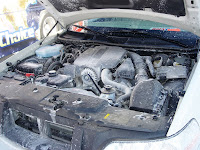 The salt on this rental vehicle's engine caused it to overheat twice.
Posted by AMSOIL INC. at 9:37 AM