It’s been an exciting run for AMSOIL these past ten years, with steady growth and increasing participation in so many great events. This year was no exception with many new partnerships formed with some great people and great organizations.

Beginning in January we became an official sponsor of the National Street Rod Association. The NSRA hosts street rod events in various parts of the country for people who are passionate and nostalgic about cars. The organization is like an extended family of vintage car lovers.

After a chance meeting at the Mid-America Truck Show in Louisville, AMSOIL became affiliated with another passionate lover of street rods, Boyd Coddington. Coddington, whose unique approach to building hot rods had a major impact on the hot rod scene, had been invited to Tulsa to help resurrect a 1957 Plymouth Belvedere at an event called Tulsarama, the 100th anniversary of Oklahoma statehood. The car had been buried in a vault in 1957 and the crew from Coddington’s show American Hot Rod was gathered to get it started. The intention was to install AMSOIL synthetic motor oils and Ea filters on the car as part of the process, but alas, despite the good intentions the car proved to be an unsalvageable rustbucket, having set underwater for years or even decades.

The Coddington / AMSOIL relationship was only just beginning, however, as Boyd and Jo

Coddington united their team around a groundbreaking Bonneville build. Their aim would be to set a new record for the fastest pre-1934 roadster, 3 liter/blown gas/modified with Jo Coddington at the wheel. The building of the AMSOIL/Coddington roadster, dubbed “Salt Fever,” was filmed in August and shown on TLC’s American Hot Rod in September.

Another great partnership that formed in 2007 was the AMSOIL sponsorship of the Four Wheeler Top Truck Challenge, a grueling week-long experience in which off-road vehicles and their drivers are pushed to the limits. It was the 14th year Four Wheeler magazine assembled its crew to host this challenging competition which is covered extensively in the magazine as well as online and in a DVD.

The third annual Diesel Power Challenge was conducted in June as well, in Salt Lake City. AMSOIL has been an advertiser in Diesel Power magazine from the first issue, recognizing the growing popularity of the diesel truck market. The Diesel Power Challenge put a group of reader selected diesel trucks through the paces for two days, including a “tie-breaker” event related to fuel economy. It isn’t just about power, though these vehicles have more power than ever. 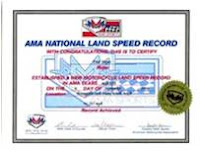 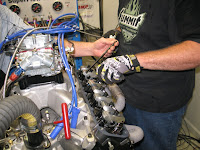 Last but not least, AMSOIL became sponsor of the Mopar Muscle Engine Challenge this year. The Third Annual Mopar Muscle Engine Challenge featured the 410-inch Small Block engine. Eight engine builders participated in the final competition, first displaying their work at the Mopar Nationals in Columbus, then later having their engines put through the paces at Comp Cams in Tennessee. Ken Lazerri and Fuss Flagle of Indy Cylinder Heads won the competition this year by three hundredths of a point, unseating the two-time reigning champ. This year’s 2008 competition will feature a 440-inch based spec engine. 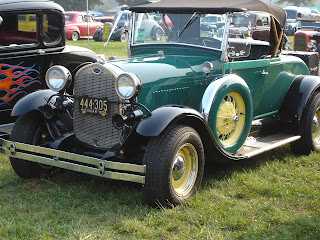 With the street rod scene is as hot as ever the National Street Rod Association is thrilled about its schedule for 2008. AMSOIL is proud to be associated with such a passionate, grass roots organization.

Here are the NSRA Events for 2008. If you love cars, and you're anywhere in the neighborhood, plan to check out a car show next year. You'll be glad you did.
Southwest Street Rod Nationals
April 4,5,6
Oklahoma City, OK

The Dyno Results Are In!

The February issue of Mopar Muscle magazine has a nice feature story summarizing the dyno results of the 2007 AMSOIL/Mopar Muscle Engine Challenge. If you have been following along, then you know that eight engine builders were competing to see who could get the most power from a finite budget in a specific engine. This is a competition designed to show grass roots engine builders how to maximize their efforts when they do not have unlimited bank accounts. It's real people doing really cool things to squeeze more more or one more foot pound of torque from their machines.

The winners were announced in Orlando last week. But it is just as much fun when you see who did what and how they did it. After glancing at page 18, check out the whole story beginning on page 30.
Posted by AMSOIL INC. at 10:55 AM No comments:

PRI Show Has It All 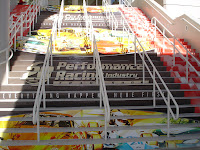 The show not only covers every component for racers, it covers every kind and style of racing from go-karts to NASCAR and everything in between.

Boyd and Jo Coddington were impressed by the scope of the racing industry, having their first racing adventures at Bonneville this summer. Yesterday afternoon they presented their story of the Salt Fever Bonneville build and in the evening were the featured speakers at a special AMSOIL Dealer meeting. For all who attended it was a memorable evening with two really influential and generous people. Much like A.J. Amatuzio and AMSOIL re-defined the standards for quality in the oil industry, so Boyd Coddington re-defined the hot rod scene with his creative, passionate approach and love of cars.

If you’re a racing enthusiast, be sure to follow the AMSOIL racing teams on our racing blog or visit the racing section of our site, which is jam packed with racing news, photo galleries, video racing footage, and more. If you are a racer using AMSOIL lubricants and filters, send us your photos and tell us your story. Perhaps we’ll be able to add you to the testimonials section of our site. 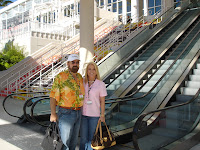 Boyd and Jo at entrance of the sunlit Orlando Convention.
Posted by AMSOIL INC. at 3:55 PM No comments: 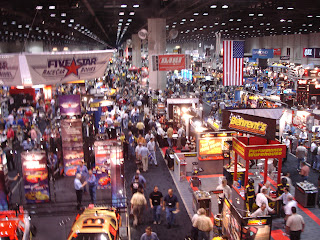 Beginning with a warm Exhibitor Reception in the main lobby last night, the 20th Performance Racing Industry Show got underway. Press conferences, seminars, and a convention center filled with anything and everything to do with racing, it’s all here. Exhibitors from every corner of the racing scene can be found putting their best grill forward.

Any number of AMSOIL sponsored racers are in town wearing their AMSOIL colors. In addition, Boyd & Jo Coddington flew in from the West Coast to present a seminar entitled, “Boyd Coddington Builds a Bonneville Hot Rod.” The famed hot rod stylist broke new ground this year with the “Salt Fever” AMSOIL/Coddington Bonneville Roadster. Later today Boyd and crew will re-tell their story at an AMSOIL Dealer meeting in the Convention Center.

Mopar Muscle magazine announced the winners of their 2007 AMSOIL Mopar Muscle Engine Challenge at one o’clock in the press room. After thanking all the sponsors who make it possible, the magazine presented first prize to Ken Lazerri and Russ Flagle of Indy Cylinder Heads who won the competition by three hundredths of a point. Publisher Jim Foos and Editor

Randy Bolig also extended an invitation to Mopar engine builders to participate in the 2008 AMSOIL Mopar Muscle Engine Challenge which will feature a 440-based spec engine. 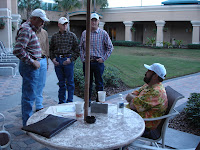 Coddington fans from Oklahoma come over to greet Boyd and express their enthusiasm for his TV show and his work. 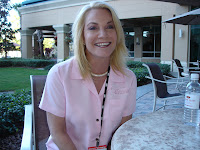 Jo shares how cars have been in her blood from her earliest days of go-kart racing at age six. Her father had to put a restrictor plate in the kart because she never took her foot off the accelerator.
Posted by AMSOIL INC. at 3:50 PM No comments: