Faces on the Flats

The action is shifting into higher gears here in Bonneville. In addition to the AMSOIL/Coddington 1927 Ford Model T Roadster, there are quite a few other AMSOIL lubricated record seekers out on the Flats this week. A few nods of the cap are in order as things get underway. 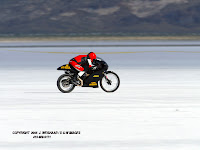 As founder, president, CEO and chief engineer of Hayes Diversified Technologies (HDT USA), Hayes has led the company to become the largest supplier of military motorcycles to the U.S. Defense Department. No one puts motorcycles through more extreme paces than Hayes. For this reason, the company relies on AMSOIL for the most grueling tests of all. “With over a year of testing, we have found that AMSOIL products continually outperform all other lubricants. AMSOIL provides improved performance, increased fuel economy, lower oil consumption and significantly reduced engine wear in all operating conditions.”
“Just Glad To Be Here”

Another face on the Flats powered by AMSOIL is Lloyd “Hooley” Huffman’s team, “Just Glad To Be Here.” He’ll be striving to break his personal best of 241 mph in a 1953 Studebaker. The team will also be fielding a 1951 Henry J. Co-sponsored by AMSOIL Dealer Pat Grady, we’ll look for new record breaking runs this week.
Johnson's Hot Rod Shop
The builders of last year's head turning G-Force 'Cuda will be back at Bonneville with a new car. An editorial in Popular Hot Rodding called it, "The Greatest Street Machine Ever Built." Despite the hyperbole, we know these guys know how to make cars. And for maximum G's on the Flats this year they will look once again to AMSOIL.
As we hear more, we'll keep you posted.
Posted by AMSOIL INC. at 3:15 PM