Bonneville: It's a Wrap 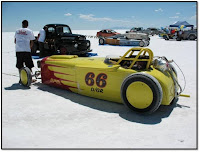 Speed Week 2007 is now recorded in history. The 199 mph record for pre-1934 Roadster, 3 liter/blown gas/modified remains intact.
The AMSOIL/Coddington car made one run on Friday as a shake down after the off course spin on Thursday. The car remains strong, improvements will be made, and the team will be back in October to go for it again. The team has learned a lot here. This week's Bonneville efforts featuring the AMSOIL/Coddington car is currently scheduled to air on TLC in October. Stay tuned for air time.
As for the stuck motor home – it is finally out, but during the day three other tow trucks also got stuck trying to assist in the rescue effort. As of Saturday the biggest yellow tow rig still remained stranded and had started to falling on its side in the sand. 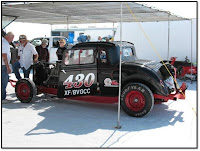 The miscellaneous photos here today will hopefully give you a feel for the flavor and flair of Bonneville. 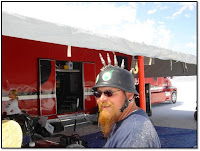