We’ve started a new blog here to serve up information about the many AMSOIL activities that do not fall under the heading of “Racing.” Whereas racing is exciting and serves as a wonderful vehicle for reaching enthusiasts, there are many other venues where enthusiasts gather, and it is a thrill for AMSOIL to be present in the midst of all this action.

In June AMSOL participated in the Four Wheeler Top Truck Challenge in Hollister, Calif., and later the Diesel Power Challenge in Salt Lake City. July proved to be a prep month for the especially busy month of August as AMSOIL representatives head off to Sturgis for the annual biker rally there as well as the NSRA Street Rod Nationals in Louisville and the Mopar Nationals in Columbus, Ohio.

Topping the charts for adrenaline chasers will be the Bonneville experience in which Boyd Coddington strives to set a record in the AMSOIL Model T driven by his wife Jo. We’ll be adding much more about this as the days tick nearer. To say the least, Jo has “salt fever.” 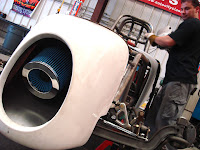 Bonneville Speed Week is now less than two weeks away and the car is coming together nicely. The entire build and pursuit of the record will be aired on Coddington’s TV series American Hot Rod. Cars that Boyd Coddington's team has built have won the prestigious “America's Most Beautiful Roadster” Award a record seven times and the Daimler-Chrysler Design Excellence Award twice. The eyes of the world will be watching.

And we look forward to keeping you posted.
Posted by AMSOIL INC. at 10:29 AM