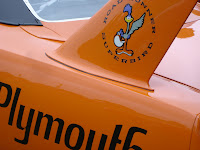 An estimated 50,000 people from all fifty states are gathered here at the National Trail Raceway celebrating the 27th anniversary of the MOPAR Nationals. The event has been here at National Trail Raceway since 1998, where it also had been held from ’86-’92. Every parcel of turf in this 30 acre compound, is crammed with cars or people gathered to see the sixties and seventies cars they love.

A Manufacturers’ Midway, Swap Meet, parts suppliers, three days of drag racing, burnout contests, parading cars, and thousands of vehicles just being put out there to show, with plenty more for sale -- it’s all Mopar and it’s all here.

People line the streets with lawn chairs to watch these premiere muscle cars rumble into town. The locals use the opportunity to strut their own Mopar muscles as well, adding to the festive air that surrounds this serious venture. One magazine editor estimated that there were more than four million dollars worth of Mopars parked around the grounds. My guess is that the dollar value of the cars is much higher than that since an award winning ’70 Cuda sold for $750,000 at the Barrett-Jackson auction last year.

embled by the nation’s top Mopar engine builders. It’s the AMSOIL sponsored MOPAR Muscle, Engine Challenge. The brainchild of MOPAR Muscle magazine, the competition features an engine challenge of an unexpected nature. Who can create an engine with the most horsepower and torque, but at an affordable price? In other words, the contest is designed to help MOPAR Muscle readers get more from the engines they build, on the budgets they live with.

After putting the engines on display here at the MOPAR Nationals, they will then be crated and shipped to Comp Cams in Tennessee. There, the engines, with builders present, will be put through the paces. In the end a champion is honored, though all the builders have a great privilege in being selected.

This year’s competition features the small block Mopar, limited to a 410 ci engine displacement. The block itself must be a production cast-iron block or replacement block. All engines will be running AMSOIL synthetic motor oils.

One of the participants, David Burns, was in the competition again this year with his wife Dianne. As a result of being in it last year, he received many new customers. 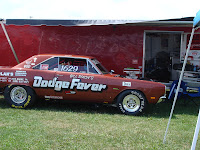 MOPAR Passion
As you walk about the pits (where the drag cars are gathered) you can see that Mopar enthusiasm extends beyond the muscle cars themselves. One quickly loses track of how many Dodge Ram pickup trucks there were towing trailers into the event. Brand loyalty is in high evidence here.

Since AMSOIL Dealers are likewise passionate about the AMSOIL brand, a MOPAR/AMSOIL wedding would make sense underneath any hood.
Posted by AMSOIL INC. at 10:28 AM