The Engines Have Been Delivered 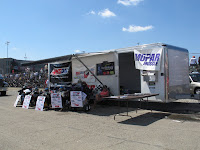 Act I of the Mopar Muscle Engine Challenge has been completed. The eight engines competing in the Challenge were put on display at the Mopar Nationals in Columbus two weeks ago. Last year's winners David Bruns and his wife Dianne were on hand along with a host of other builders from all points of the compass.

After the Nats, the engines were crated and shipped to Comp Cams in Memphis, arriving on August 13. Until the Dyno competition begins on Monday September 17th, there's not much to tell. For full coverage of this years competition, follow along in Mopar Muscle magazine beginning with the October issue. 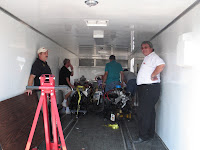 It was a hot one in Ohio as the editors and staff of Mopar Muscle magazine loaded the crated engines back into the trailer in preparation for Act II. Up till now, everything has been but a prelude.
Posted by AMSOIL INC. at 10:18 AM