On the Threshold of Bonneville 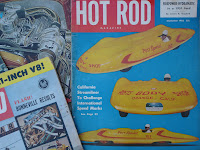 How fast is fast?
According to a cover story in the September 1952 Hod Magazine, a California Streamliner was preparing to set a new record out on the Bonneville Salt Flats. Its goal: surpass a then current speed record of 219 mph. In those days, that was a pretty fast clip, though today most of us are well aware that the slowest qualifiers at the Indy 500 are exceeding this speed on a large circle track.
Over the years, our fascination with speed keeps countless manufacturers, racers and speed freaks coming back to the Salt Flats in Bonneville. Dubbed "the fastest place on earth" one wonders whether the Bonneville Salt Flats are the origin of the phrase "flat out fast."
In 1961, an assortment of new records were established including a Streamliner that rushed to 262.231 miles per hour in the fuel class.
At the end of the sixties the top cars looked more like rockets with wheels than cars. Drivers like Craig Breedlove pushed past the 400 mph mark and eventually 600 mph. Before long, some of the vehicles actually were rockets.

Boyd Coddington's Blown Gas Modified Roadster is ready to rock. Driver Jo has salt fever, as they say, and is eager to see what the AMSOIL/Coddington Model T can do.

Speed Trivia: In the early days of the locomotive, editorials urged people not to ride the trains because at 25 miles per hour, the air would be sucked out of their lungs and they would die.
Posted by AMSOIL INC. at 1:49 PM