Cat Stevens once sang, "There is so much left to know and I'm on the road to find out."

Well, that seems in part what Gary and Monika Westcott are doing with their Turtle Expedition. It's a global adventure that has been taking them across some of the most remote regions of the world.

As we noted in 2009 the Westcotts have seen more sights, sounds and places in the world than most will in a lifetime. Experienced travelers, they have made it their goal to do the impossible at times. It not only gives them something to talk about, but also something to write about. In addition to adventurers they are writers as well.

In 1996 they drove completely across Russia (including Eastern Siberia) in an adventure both American and Russian experts said could not be done. With 600 miles of driving on frozen Lena River, to arriving at the northernmost city in the world that can be driven to in Hammerfest, Norway, these voyages are not for the faint of heart. 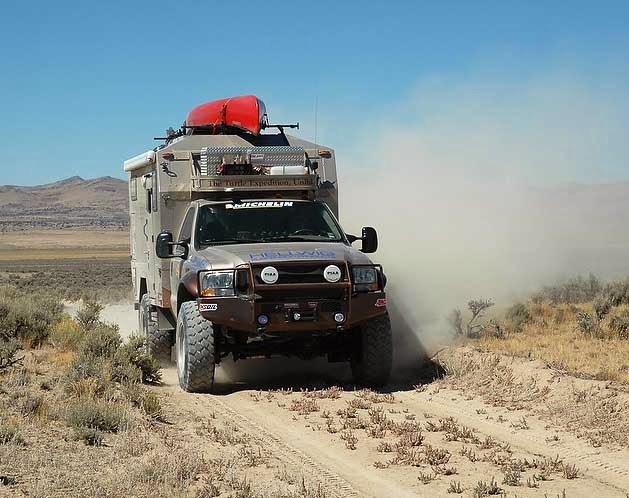 The photo in the dust (left) was taken a few years back when they were researching the historic Hastings Cutoff, the mistaken route taken by the doomed Donner Party. Wescott's story was published in Four Wheeler magazine and Power Stroke Registry.

Currently the Turtle Expedition is in Greece, and Wescott writes, "The Turtle V is running like a Swiss watch, or perhaps a little louder. Thanks to the AMSOIL Dual-Filter system we use, we have not had to change the oil now for over 6,000 miles, and it still looks clean." Because of the nature of their travels much of the journeyis in second and third gear at speeds under 35 mph. In Turkey they plan to change the smaller main oil filter and add the necessary AMSOIL 15-40 Heavy-Duty Diesel/Marine Oil from their 12-gallon reserve tank built into the Tortuga expedition camper. Their next maintenance is slated for when they reach Kirgizstan and the Chinese border.