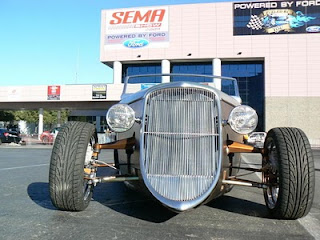 It's hard to believe the 2010 SEMA show is but one week away. AMSOIL is once again poised to generate some buzz amongst those in attendance with several new products entered into the New Product Showcase. Each year Las Vegas draws thousands of manufacturers and companies to the largest automotive specialty products trade eve

nt in the world. The Specialty Equipment Manufacturers Association (SEMA) attracts over 100,000 industry leaders from all over the globe seeking to gain knowledge of the latest developments in the industry. Here's a sneak peek of what AMSOIL has in store for this year's event.

AMSOIL XL Extended Life Synthetic Motor Oil
Launched in October, AMSOIL beefed up its XL motor oil family with a reformulated version of this long-standing product line. AMSOIL XL Synthetic Motor Oils feature a longer drain interval of up to 10,000 miles or six months specifically for motorists seeking the convenience of fewer oil changes without compromising protection and performance. Its multi-viscosity formulation fits a wide range of applications, including API SN and ILSAC GF-5. The 5W-30 viscosity is also recommended for the new energy conserving specifications of GM dexos1™.

AMSOIL Dominator Coolant Boost
AMSOIL Dominator Coolant Boost hit the market in July, aimed at improving efficiency and horsepower on the track. It provides racers and motorists with significantly lower engine operating temperatures, quicker engine warm-up times and advanced corrosion protection. Its tiered surfactant technology delivers quick and efficient heat transfer inside radiators and cylinder heads, resulting in reduced operating temperatures and more efficient operation.
This is only the beginning of what AMSOIL has in store. Check back soon for the second batch of AMSOIL products getting ready to hit the scene at the 2010 SEMA Show in November.
Posted by AMSOIL INC. at 10:44 AM