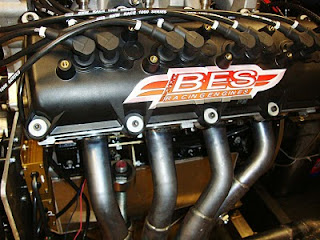 When we posted Friday, it was three down and three to go in the finals at the AMSOIL Engine Masters Challenge. To recap, the day began with Myron Cottrell, Bret Bowers and last year's champion Jon Kaase. Each team had 15 minutes to make three passes, three minutes to evaluate numbers and 20 minutes to make adjustments before pushing the engine through three final passes from 2500 to 6500 rpm.

Scott Main of MPG Heads entered the dyno arena fourth, and it wasn't long before they knew there was going to be a problem making things come together, but with seconds to spare the Ford 404 Cleveland engine showed a little life and they went to work trying to get numbers.

Next up John Lahone and JL Reliable Engines was hooked onto the dyno, a Chevy 430 Small Block. Lahone was 18th alternate for this competition which begins with 40 selected teams and a gallery of extras in the wings. After their initial calculations the Lahone team determined to make two minor adjustments, one degree on the timing and one adjustment to the jet. When all was said and done JT Reliable was in first place with one team to go, BES Racing Engines headed by Tony Bischoff. 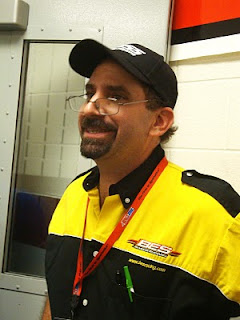 Bischoff (right), who looked pensive during the initial warm-up runs, brought in a Chrysler Gen III 417 Hemi. Among other things, the engine featured double spark plugs for each cylinder, not your everyday setup. Needless to say, the engine performed flawlessly, and he looked quite pleased afterwards.

It's not over till the engines are examined to make sure everything is according to spec. Bischoff's Hemi had no issues, looked great on the dyno as well as after teardown. Congratulations to this year's Engine Master, Tony Bischoff and the BES Racing Engines team.
Posted by AMSOIL INC. at 3:06 PM