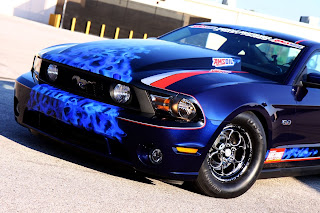 With the 2010 SEMA show just days away, the AMSOIL/Muscle Mustangs and Fast Fords 2011 Mustang GT is lookin' good. This special project Mustang that will be on display in the Source Interlink Media booth during the 2010 SEMA show in Las Vegas.

In just two months time, the MM & FF staff transformed the Kona Blue ’11 GT from a stock Mustang with 412hp, into a street-legal, drag race monster capable of over 650 horsepower and 10-second quarter-mile times. The new 5.0L Ti-VCT V-8 has been enhanced by Blow-By Racing with a Ford Racing Performance Parts supercharger kit with a custom tune. Then they installed a 175hp shot of nitrous from NOS in our own SIM Tech Center. Of course the powertrain benefits from AMSOIL fluids throughout. And with more air and gas going in, they installed Kook’s latest headers and exhaust system with catalytic converters and slick tail pipes. 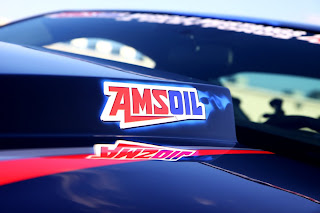 Along with the go, the AMSOIL/MM&FF GT has plenty of show. Paul Holman of Visualfxpaint.com, sprayed the Roush wing, front fascia, and Cervini’s hood with a racy scheme including bright blue “real fire” effects. Amazingly, all the logos, colors and stripes on the body are hand painted!

With the paint complete, the GT was back in our SIM Tech Center in Tampa where the rest of the work was completed. The SEMA Stang rides on new Weld Magnum wheels with Moroso and Nitto rubber meeting the road. Strange brakes and coil-over struts compete the front suspension and BBR and BMR parts make up the rear suspension. There is even detail under the hood and a slathering of modification to the interior as well including Corbeau seats, a Maximum Motorsports roll bar, twin carbon fiber nitrous bottles and much more.