The 2010 AMSOIL Street Rodder Road Tour kicked off on May 15 as Jerry Dixey and crew made their way to the 20th Cruisin’ Ocean City Car Show in Ocean City, MD. Leading the road tourians in a custom-built ’27 Roadster Pickup, Jerry has planned a series of summer tours around the country for any street rodder who wants to come along for the ride.

The first tour of the summer kicked off with a send-off party at Southern Rods & Parts in Greer, SC. Tour participants and about 50 local hot rodders turned out to witness the official unveiling of the 2010 Road Tour 27XL Roadster Pick-up that is leading this years’ tour. As the Roadster was revealed, it was clear how much attention to detail Zane & crew at Cotati Speed Shop had put into every aspect and the crowd was rightfully impressed.

The first stop on the tour was highly anticipated, as the Road Tour participants were one of the first groups to see the new NASCAR Hall of Fame in Charlotte, NC. The museum displays and exhibits illustrate the rise of the racing industry, and was coined a must-see for any car enthusiast in the Charlotte area. The next day brought stops to various companies with ties to the street rodder industry, including a visit to Dale Earnhardt Inc. just outside of Mooresville NC. The facility serves as a tribute to what many consider to be the best race car driver in history, Dale Earnhardt Sr, and displays a collection of special interest vehicles, trophies and memorabilia detailing the legends life. The tour then headed north for more stops at various museums and facilities before landing at the site of the Wright Bros. famous first-ever plane flight in North Carolina. The memorial park site includes recreations of the original camp, as well as a runway in the sand that could be viewed from the hill overlooking the site. The tour had a good time standing in a place of American history and seeing where the aviation industry started. 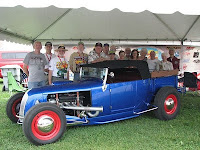 From there, the tour headed to the US Naval Air Station Oceana, home to the Navy’s jet fighter strike force. While there, the crew got a chance to have lunch with the airmen and women who fight to keep our country safe. Afterwards they were given the opportunity to see some of the planes that played a large part in the history of Naval Aviation.
After a couple more stops along the way, the Road Tour landed in Ocean City to a sea of street rods, customs and muscle cars. The 20th Cruisin’ Ocean City was the best one yet in the opinions of many, and the ’27 Roadster was a popular exhibit that everyone wanted to see. The Road Tour crew also drew the attention of celebrity Henry Winkler (a.k.a. the Fonz), who spent some time in the Road Tour tent throughout the weekend and even posed for a picture with the Road Tourians. Overall, the first leg of the 2010 AMSOIL Street Rod Tour was a great success and signals the start of many more to come throughout the summer. We’ve said it before and we’ll say it again, don’t miss this opportunity to join any of the remaining tour legs if you are able. The tour never fails to yield a lifetime of unforgettable experiences and good times.
Illustration courtesy Street Rodder magazine.
Posted by AMSOIL INC. at 8:18 AM