Another Successful Run in the 2010 AMSOIL Street Rodder Road Tour Jerry Dixey and crew just completed the 3rd leg of the 2010 AMSOIL Street Rodder Road Tour, and the Vintage Air Tour is now behind them. Kicking off in Midland, TX at the Commemorative Air Force Museum, the tour was able to view vintage combat planes, artifacts and memorabilia commemorating the wars our country has fought in. After touring the facility and lunch, everyone was off towards Amarillo to meet Bill & Mark Warrick at the Soncy Road Body Shop. For the last 45 years Bill has been creating restored masterpieces out of anything from street rods to motorcycles, and his son Mark recently joined the business to lend his own expertise. 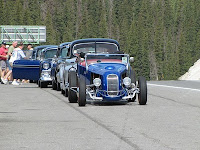 Just West of Amarillo, Jerry and crew stopped at the Cadillac Ranch where six Cadillacs are buried nose first in the ground. With no sign, explanation or anything else describing how or why they are there, the Cadillac Ranch leaves the guessing of how they came to be there up to those who visit. Dixey described this spot as a ‘mecca’ for car buffs around the world.

The next destination was Durango, CO to a tour stop the crew had been looking forward to all week. After boarding a narrow gauge railroad and making a three-hour trip up a mountain, they were let off in the old mining town of Silverton. After beautiful scenery, lunch, and some shopping the train took them back down the mountain and Jerry declared the Durango to Silverton Train Ride a must-do for anyone’s bucket list.

After being the guests of honor at a local car show, the tour headed onward to Pueblo, CO for the final destination of the Vintage Air Tour leg: the NSRA Rocky Mountain Nationals event. The crew turned many heads as they rolled in with about 60 vehicles with Dixey leading the way, and a great time was had by all.
Next up for the 2010 AMSOIL Street Rodder Road Tour is the Factory Five Racing Tour, kicking off July 10 in Wareham, MA. The week will bring many stops to various rod shops, before the tour lands at the Syracuse Nationals street rod event in Syracuse, NY. There is still time to join any of the remaining tours. If interested you can learn more at www.streetrodderweb.com or request an application from info@amsoil.com.
Posted by AMSOIL INC. at 2:15 PM