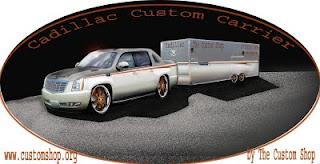 The excitement is building and final plans being hammered out for the SEMA Show just weeks away. AMSOIL has been busily preparing for another successful appearance at this year's show, and word is spreading throughout the car builder scene on what AMSOIL can bring. AMSOIL will be installed in more high-profile vehicles than ever before. Here's a peek at another SEMA 2009 AMSOIL-installed ride.

The Custom Shop out of Flanagan IL is no stranger to the SEMA scene. They've previously done builds for Ford Motor Company, General Motors, Nissan and Toyota. So when they approached AMSOIL with their latest project, a 2007 Cadillac Escalade EXT with matching enclosed trailer, we had to jump on board with a product that can endure such hauling. The Custom Shop is filming the build from start to finish for V8-TV, and plans on filming out the finished project right there in Vegas. The vehicle theme is designed to create a high-end SUV that will pull a custom built trailer, all with Air Ride Load Leveling Technology.

‘Custom’ is the common term for this build. Modifications include a custom show paint job, Pewter Pearl Color Shift top with a Pearl White bottom airbrushed with Candy Sunset center. From there, a custom cowl hood, tinted windows, 22’ chromed rims and handles, right down to custom pedals all work to make this Cadillac unlike any other on the streets. That’s just the SUV itself; the matching trailer it tows holds its own with a complete audio/video system including TV and DVD player, air suspension and display area inside.

A check under the hood will find AMSOIL Signature Series 0W-30 oil, AMSOIL Severe Gear Synthetic Gear Lube, AMSOIL Synthetic Fuel Efficient ATF, and of course, an AMSOIL Ea Oil Filter. What makes the best builders the best is their attention to detail, including the details you can't see, but which make a difference in the ultimate performance. Enjoy the show!
Posted by AMSOIL INC. at 8:24 AM