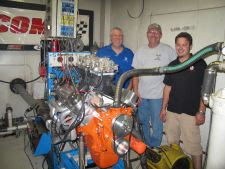 Last month 8 talented teams of engine builders from across the country descended upon Comp Cams test facility in Memphis to determine which engine was best designed for performance and cost. Last week Mopar Muscle magazine posted the final standings of the AMSOIL/Mopar Muscle Engine Challenge on their website.

As title sponsor for this event AMSOIL was in every engine lending a hand in improving power and performance. Over the course of three days the engines were put through rigorous testing and given an overall rating based on peak horsepower and torque. In the final analysis, the retail cost of parts were tallied and factored into the final score which ultimately determined the winning engine.

This year Schurbon Engine and Machine teamed up with Mopar City to build an impressively powerful, economical stroker big block and earned the first place spot. Nearly 600 horsepower was created by using stock crank and rods, flat-tappet camshaft and cast pistons to create the winning formula. Second place went to Chenowith Speed and Machine with their highest combined horsepower and torque score, with LaRoy engines coming in at a very close third.

Congratulations to all participants this year, AMSOIL is already looking forward to seeing next year’s innovations in engine building.
Posted by AMSOIL INC. at 11:35 AM