It takes a hearty breed to make a homestead in our many of our Northern states where sub-zero temps chill the bone and icy roads make driving a hazardous adventure. The reality is, most people here know how to dress for the weather, and our highway departments know how to deal with those icy roads. With snowplows at the ready the main thoroughfares are kept open even in the worst storms. Salt and sand trucks are employed to keep ice melted at intersections and on highways, and to give traction where needed.

The downside of all that road salt, however, is a lot of rust formation on car frames and bodies. The problem of rust leads many owners of classic vehicles to place their gems in storage for the winter each year.

What many people don't realize though is that engines can rust, too. When an engine sits idle for months on end it's important to make sure your prized possession is protected from the inside out. Rust protection is one of the features of AMSOIL Z-ROD Synthetic Motor Oil which has been formulated with rust and corrosion inhibitors that protect component surfaces by forming a protective barrier to seal out water and contaminants. 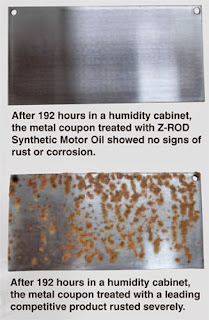 To prove its effectiveness, AMSOIL submitted Z-ROD Synthetic Motor Oil to the Standard Test Method for Rust Protection in the Humidity Cabinet (ASTM D-1748). This test evaluates the rust-preventative properties of oil under high-humidity conditions, similar to those faced by a covered hot rod in a damp garage. After 192 hours in the humidity cabinet the metal coupon treated with AMSOIL Z-ROD Synthetic Motor Oil showed no signs of oxidation while the coupon treated with a leading competitor’s product failed the test after 24 hours.

AMSOIL Synthetic Motorcycle Oils also contain anti-rust agents to protect again rust. Most bikers in our Northern Tier states park their bikes for the winter, both because of the cold as well as the hazardous road conditions. Rust can cause serious damage such as roller bearing failure, uncontrolled wear, compression loss and blow-by.

Don't wait till it's too late. Oil in an of itself doesn't protect against rust. What you need is to find an oil that is formulated to fight this predator. You don't have to look any further than AMSOIL.
Posted by AMSOIL INC. at 9:47 AM