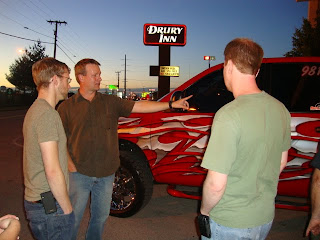 Bad weather hit hard this weekend with floods ravaging communities from Tennessee to Georgia but today, here in Bowling Green, the sun was hot and the sky blue as sixteen diesels from around the country gathered for the 2010 Diesel Power Challenge (DPC). It is the second year this event was scheduled for Bowling Green, but there's been a twist. Day two will not be held at the Beach Bend drag strip because Beach Bend is ten feet underwater. Tomorrow we'll head down the highway to an alternate track outside Nashville. But that's another story. 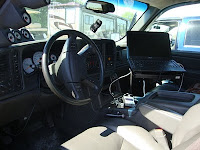 The DPC begins long before this first week in May here in Bowling Green. It begins months in advance as the magazine invites diesel enthusiasts to send in their truck photos and specifications for consideration to participate in the challenge. The first challenge is for the editors and publishers of Diesel Power magazine, to narrow the field down to five contenders from each diesel brand, plus last year's champion Robert Evans of Nevada.

The week itself actually began Monday evening as director Larry Saarvela assembled the Source Interlink staff and a freelance film crew from Nashville to go over the details of what the week would consist of. 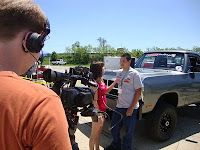 This is a made for TV event that provides editorial content for the magazine. This is the fourth year AMSOIL has been a sponsor of the event which, this year, will also be a ninety minute program on the Outdoor Channel, which reaches 30 to 40 million households. The major manufacturers -- Ford, Chevy and Dodge -- have also become increasingly interested in how their vehicles are being modified for these ultimate tests.

Day One is the dyno test, at TS Performance. It's a somewhat time consuming affair but emotional for every team as they strive to pull the best numbers possible. The somewhat tedious task of tying down each vehicle can make the day drag, but the end result can be exhilarating. Occasionally there is even some unexpected drama, but you'll have to wait for the DVD to see what that was about.
Here are a few photos to give a feel for what we're seeing here, knowing the best is yet to come.
Top Right: Editor David Kennedy shows the film crew the primary features of these diesel gladiators that are the stars of the show, highlighting key areas to watch for trouble and other things to highlight.
Top Left: An example of the level of sophistication many of these competitors bring to Bowling Green. This cockpit has every sensor dialed in to allow optimal adjustments at every stage of the game.
Lower Right: Molly Brown, AMSOIL Technical Product Manager, is again serving as the on air spokesperson for the Diesel Power Challenge, here being filmed interviewing one of the competitors just before he gets hooked onto the dyno. 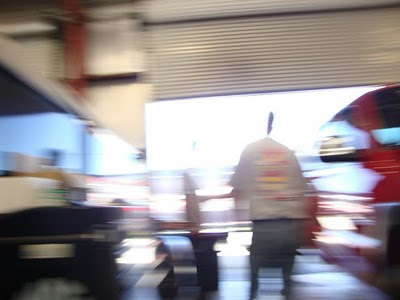