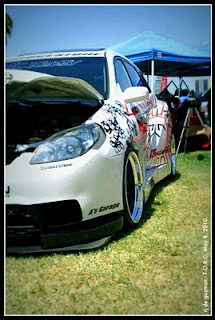 Ron De Guzman has a true passion for cars and a penchant for taking as much time as needed to create the modifications he envisions for every aspect of his ride. His 2003 Supercharged Toyota Matrix TRD took years of tweaks and modifications to reach the end result it is today. From 12 hour grinds to falling asleep underneath the car, De Guzman puts everything he’s got into finishing what he started.
De Guzman approached AMSOIL back in 2007 as he was preparing his Matrix for SEMA. Toyota was introducing the new body style of the Matrix and looking for the best four in the country when they found this one. They approached De Guzman, took his ride to Las Vegas on a trailer and set him up as a featured vehicle in the Toyota booth. This opened many doors for future opportunities and while at SEMA, Ron met with a representative from the respected and established Los Angeles-based custom auto body shop DONLYSON. It was here that Ron was introduced to the possibility of turning the Matrix into a custom wide body, and he decided to go for it.
It took 2 ½ years to complete the DONLYSON wide-body customization, 4 months to build the DPE wheels, 3-time graphic redesign, plus innumerable aftermarket mods to both the interior and exterior. After years of ongoing tweaking and customization, De Guzman is the owner of the one-and-only true wide body Matrix that never fails to turn heads.
Most recently, De Guzman attended the T.O.R.C. (Toyota Owners & Restorers Club) event and took home first place bragging rights for his Matrix. While lining up behind the other impressive rides waiting to be placed, De Guzman was noticed and slotted ahead of anyone else in a prime piece of show real estate. In addition to his first place ‘Best of Matrix’ win, he secured an interview and professional photo shoot with photoshootmycar.com. AMSOIL is proud to be a sponsor of such a talented builder, enthusiast, and show-stopping Matrix and will be keeping up with his future endeavors.
Posted by AMSOIL INC. at 3:04 PM