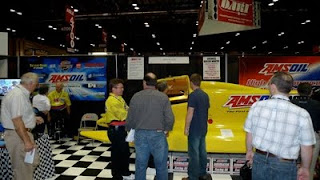 As it turns out, the PRI Show management has taken great pains to keep cameras off the show floor this year. This is not an uncommon practice at major trade shows. Their aim, in part, is to help deter companies from stealing ideas from their competition. Nevertheless our intrepid man on the scene did capture a few AMSOIL logos along with the latest scuttlebutt. Word from several sources is that AMSOIL is creating quite a bit o' buzz in Orlando this week.

Terry Rinker and his powerboat racing crew were again located in one of the AMSOIL booths in a great location. The canary yellow boat really draws people like flies to molasses, though it could be Terry's charm. AMSOIL is proud to be associated with this veteran champion.

There seemed to be plenty of Off Road Racing chatter as well here this week as The Off Road Championship (TORC) Series enters its second year. Take a close look at this vehicle here because these 800-horse off road trucks don't stay shiny like this very long in the bump and grind world of off-road short track racing.

In other news, AMSOIL Racing Manager Jeremy Meyer met with staff from Circle Track magazine to launch the AMSOIL Great American CIRCLE TRACK Tour. Senior tech Editor Bob Bolles will be criss-crossing the United States to interact with racing teams, drivers and fans to promote grass roots racing, discuss current trends in racing technology and build sponsor awareness among the hard-core racing community. You can read the details in the months ahead at the AMSOIL Racing Blog.
And there's more to come!
Posted by AMSOIL INC. at 10:23 AM