The 2009 New York Auto Show is underway at the Jacob Javits Center in New York. This is one of the world's premiere events for showcasing the latest and greatest in the auto scene. Though some of the glam has been muted due to the rocky economic terrain for U.S. automakers, it's still a prestigious ten day event.

This year, John Pangilinan’s aggressive wide body SCION TC struts up front in the SCION booth running a full line of AMSOIL products. SCION introduced the new iQ at the show which is making this booth a huge media draw.

Over in the Lexus booth is the Fox Marketing/Artisan 625hp Twin Turbo Lexus IS F. Hip Hop Artist Jadakiss was on hand to promote his new TV show on MTV which comes out this summer, the IS F as a background. Jada then took a few shots with the car, hopped inside, and fell in love all over again.

A major source of buzz at the New York Auto Show this year has been the National Guard Black Ops 350Z. Here's the backstory on this tuner's dream car.

Sgt. Nicholas Ashby of the California Army National Guard (CAARNG) became part of the 2007 Hot Import Nights Tour with a rolling memorial he built for three fellow Guardsmen who lost their lives in Iraq. The Fallen Heroes car was a very popular attraction at the National Guard display among attendees and won more than 23 trophies throughout the season. In 2008, the National Guard and Sgt. Ashby built a tuner car that used the Citizen Soldier as an inspiration. "I built and designed the new Citizen Soldier Tuner to show the fine line of being a Citizen and a Soldier," said Ashby. For 2009, Sgt. Ashby is back with the Black Ops 350z that combines the spirit of The National Guard with the performance of a race car. At the heart of this striking beast you'll find AMSOIL synthetic motor oils lubricating all the moving parts to provide optimal performance throughout.
The Black Ops 350Z will be attending Hot Import Nights shows around the country throughout the year. If you get a chance, ask the personable Ashby how he combined his Passion for Cars and his Service to Country to create the Official Guard Tuner. 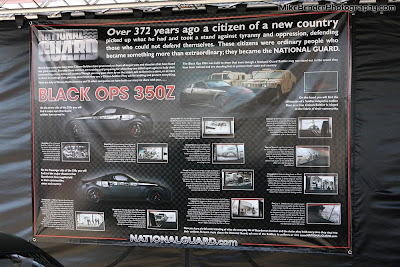 "The Guard can help you to find your passion in life. It's where I found mine." ~Sgt. Nicholas Ashby