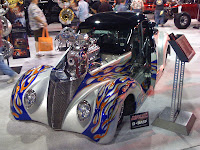 Congratulations to Paul Sykora whose ’37 Ford Coupe won a 2007 Hot Wheels Design Award for car with Attitude at last week’s SEMA Show in Las Vegas. We mentioned it in our blog last week that it was one cool Coupe. Sykora, from Orlando, Florida had installed AMSOIL Synthetic 20W-50 Racing Oil and Severe Gear Synthetic 75W-140 Gear Lube in this over-the-top 2300 horsepower machine. The car, representing Weld Racing, was located in the South Hall at the Inside America Racing Booth.

Sykora’s car was one of four to receive awards presented by Hot Wheels®, who was a prominent sponsor of this year’s SEMA in conjunction with its 40th anniversary.