On June 15, 1957, the city of Tulsa, Okla. buried a new gold and white 1957 Plymouth Belvedere Sport Coupe in a time capsule in downtown Tulsa as part of Golden Jubilee Week, a celebration of Oklahoma’s 50th year of statehood. Before the car was buried, citizens were asked to guess the population of Tulsa in the year 2007 with the promise that whoever turned out to be closest would be awarded the car at Oklahoma’s Centennial celebration in 2007. The entries were sealed and buried with the car inside the vault. 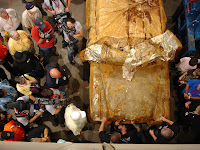 On June 15, 2007, the car was unearthed and transferred to the Tulsa Convention Center as part of Oklahoma’s Centennial celebration. Boyd Coddington, host of the The Learning Channel's American Hot Rod, was on hand with his crew to attempt to get the Belvedere running after spending 50 years buried in the underground vault. Coddington was to install AMSOIL lubricants and filters for the big dance. 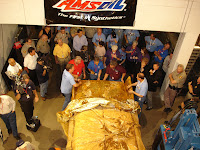 Journalists from around the globe were on hand for this truly grand opening. Unfortunately, as Robert Burns once observed, the best laid plans of mice and men often go awry. In this case, the theoretically watertight vault failed in its mission. Two days before Sleeping Beauty was to be excavated, workers unearthing the Belvedere were shocked at what they found when they removed the cover of the 12 x 22 foot vault. Several feet of mucky water had seeped in. Though shrouded in protective plastic, the evidence of potential disaster presented itself to an array of onlookers who stood aghast at the sight. Some even wept.
To paraphrase Alexander Pope, "To err is human," ...but to be on the air, is still fine.

This Thursday on The Learning Channel at 7:00 PM CST, American Hot Rod will divert its attention temporarily from the finishing of a '59 Corvette in order to be part of the unearthing of Tulsa's '57 Plymouth Belvedere that had been buried in a time capsule for 50 years.
The following week at 7:00 PM Central Coddington's team will begin Part 1 of their Bonneville Racer build, the AMSOIL/Coddington 1926 Model T.
Posted by AMSOIL INC. at 10:27 AM