By day's end Tuesday two more competitors had run on the dyno, David Bruns of Mid America Racing Engines and Tucker Caven from Speed-O-motive. Neither had the misfortune of having any problems. The power numbers were good, and so far, the big number is over 560 horsepower. Check in tomorrow for Wednesday's results in the AMSOIL Mopar Muscle Engine Challenge. 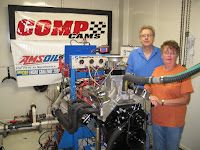 David and Diane Bruns of Mid America Racing Engines are the defending champions, and made it look easy again this year. So far, they have posted the big number. 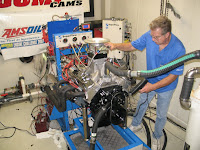 David Bruns made several timing changes during his dyno time. 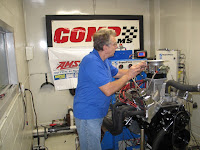 Likewise, the carb received a lot of attention.
Posted by AMSOIL INC. at 2:15 PM