Action and Anguish on the Hills of Hollister: Top Truck Challenge 2014

The 2014 Top Truck Challenge is underway and as expected, showed no mercy to competitors on the first official day of competition. The opening Tow Test event welcomed drivers and their rigs with a 36,000-lb military tow vehicle waiting to be hauled uphill. The power needed to accomplish such a feat is tremendous, and gave competitors the opportunity to showcase what they brought to the table. 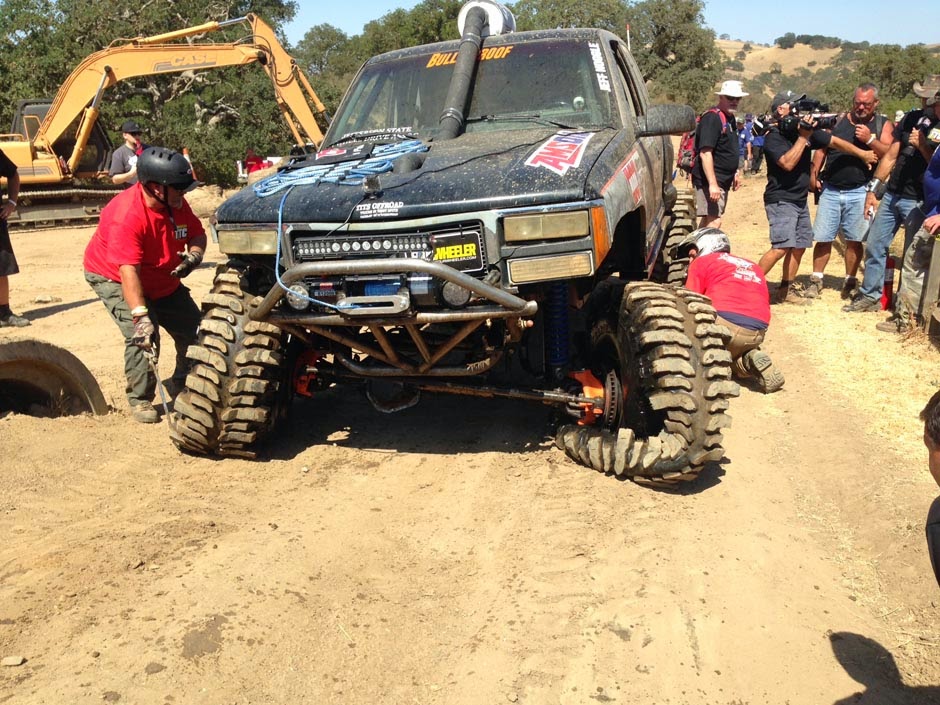 After the Tow Test it was on to the Frame Twister, which wasted no time living up to its name. It quickly claimed the tires and axle of Jeff Noggle’s ’92 GMC K1500, pictured here. Despite how bad it looks, Noggle got to work welding parts back together and was expected to be back in the saddle for the last event of the day. The cement, boulders, logs and overall mayhem found in the Frame Twister all culminated into suspense as everyone watched to see what happened (or broke) next. Recovery crews were on hand to remove the broken parts left behind, and there were plenty to be found.

The California drought eliminated the Mud Pit event as water conservation is essential right now, but organizers were ready with an alternative and responded with an old Top Truck Challenge standby: the Mini Rubicon. The Mini Rubicon took competitors through a large pit of boulders that tested both driver skill and power. Judging by the photos and videos on Four Wheeler’s Instagram updates, some had an easier time than others making their way through the course.

All of this and more took place just on Tuesday, the first official day at the 2014 Top Truck Challenge. There's plenty more to come, so be sure to check back soon for additional glimpses into the action and photos of destruction. Just ahead is the Obstacle Course, Hill Climb, Coal Chute and the grand finale that is known as the Tank Trap.

Action and traction in Hollister: Each picture's worth a thousand words...