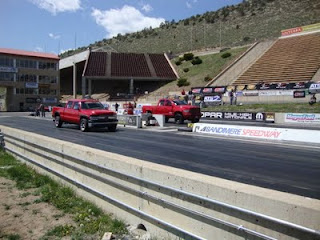 The three events of day two were conducted at the Bandimere Speedway which is tucked into the picturesque ridges of Western Denver. At the beginning of the day there were nine trucks left after the loss of one on the dyno. By the third morning four more will have been eliminated.

The first challenge was the 1/4-mile drag racing. Trucks could take as many passes as they desired to best one another and here is how they finished.

After a lunch break a five-ton trailer laden with a Bobcat was brought out onto the track. More drag racing ensued, but this new variable did create problems for some and when all was said and done we only had seven trucks left. Here's how they finished on this second challenge of the day: 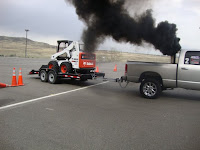 The third challenge at Bandimere was conducted up in the parking lot above the raceway. In this event the trucks had to demonstrate speed and skill at executing a course while pulling the Bobcat trailer. The course involved tight turns and several places where backing up was required. Points would be deducted for knocking over cones which lined the various facets of the course.

Thursday morning broke sunny with clear blue skies as the last five trucks went to fill up their tanks for the 150 mile ride to test these vehicles for fuel economy. Yes, the challenge includes verifying that these behemoths are also roadworthy. The fuel economy results would be used for breaking any tie in the scoring, and it did indeed become a factor. 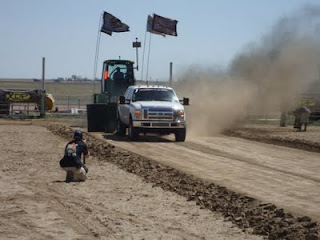 The afternoon challenge, the sled pull, was held out at Keenesburg Fairgrounds north of Denver along Highway 76. Each of the five remaining diesels gave it their best shot pulling a 50,000 pound sled donated by the NSPA, courtesy Ron Greene, Clint Cannon and Michael Sulley. When the dust had cleared, literally, the final points were calculated and the drivers were assembled for the awarding of trophies for the top three.

As it turned out, Newly Tolf and Andy Parker tied for fourth, but Andy had a better score in the fuel economy run, so Newly was bumped to fifth overall. Impressive in light of the competition coming into this thing. Third place, and a trophy, went to Joel Saunders in his 2006 Dodge Ram 2500.

Second place was captured by Dustin West of Godley, Texas in a red 2005 Dodge Ram 2500. These young 'uns showed they were definitely up to the challenge this week, and appeared to have a lot of fun throughout.

After all was said and done, our new champion turned out to be Rocky Horn with his 1997 Ford F-350 powered by a Cummins engine. This was not the first rodeo for the quiet but affable Horn who has taken second place two consecutive years in the NSPA Super Street Diesel Class. For his efforts he'll receive well deserved recognition in Diesel Power magazine this fall and a $500 shopping spree from AMSOIL.

David Kennedy noted that the competition is ratcheting higher every year. "The worst dyno score in 2011 was better than the best horsepower numbers five years ago," he said. Next year we'll undoubtedly see even more.

In the meantime, look for plenty of coverage in upcoming issues of Diesel Power, and in the DVD being produced for this event. Congratulations, Rocky! 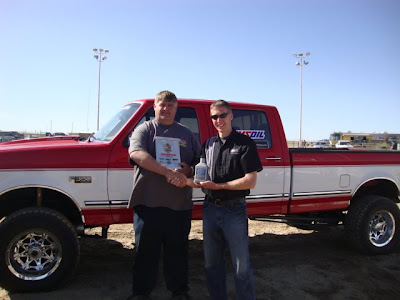