Diesel Power Challenge: Day One in the Record Books 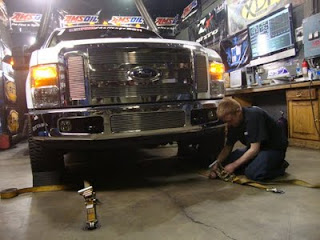 Day one at the 2011 Diesel Power Challenge is in the record books. Ten trucks and thirteen hours in the dyno booth at ATS Diesel made for one long day, but with some serious excitement along the way. The last to take a run, Dmitri Millard, was first when all was said and done, but there were a lot of trucks pulling some serious horsepower and torque numbers.

Shone Patel of Olive Branch, Mississippi filled the second slot with his 2008 Ford F-350 Super-Duty. Owen Horst pulled great numbers for third in his 2006 GMC 2500 but blew up in the process as the oil pressure fired the oil fill cap like a mortar shot and a geyser of oil painted an abstract design on the hood. Horst, a Tennessee builder, is out for the rest of the competition. 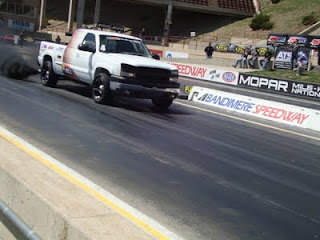 The first hour today is an open drag strip with the nine trucks taking turns pushing the limits. These guys are pulling some serious numbers in Colorado's thin mountain air. Currently Joel Saunders holds the fastest time with an 11.276 on the quarter mile. Dmitri Millard, after a few runs in the 12.3 area has now taken second away from the superquick Fidel Velasquez with an 11.621. Newly Tolf of Las Vegas, in a Silverado, also cracked the 12 second barrier, an impressive feat in these big trucks.

Bandimere Speedway, nestled in the western ridges of Denver, is an idyllic location for Day Two of this year's competition. Blue skies, decorated with a handful of scattered clouds, make for a perfect day here at the track.

Newly Tolf has now pulled a 11.496 to bump Millard down a notch, so we're seeing Dmitri screeching through several more attempts to regain a higher score. Here's an 11.71, again leaving him short. 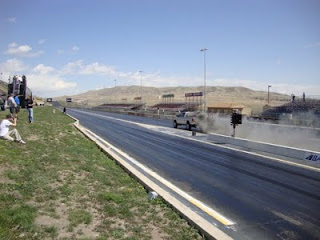 Rocky Horn has leaped in front of Fidel with and 11.775 and time is running out to best Saunders in his Dodge Ram, the only black truck in the field. And the ten minute call has just been given. Five or six passes later and time runs out on the field. The first segment of the day is finished. They'll break for lunch and then do the 10,000 lb. trailer pulling drags.