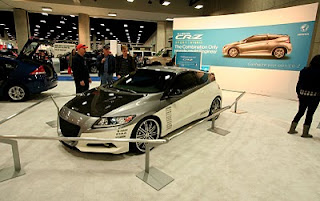 Chris Mangum of DSO Eyewear first approached AMSOIL for sponsorship as he was preparing for SEMA 2009. As one of 8 builders selected by GM to design a head-turning Camaro for the show, AMSOIL was installed throughout and Chris turned out a successful build that drew lots of looks throughout the week in Las Vegas. That was the beginning of the relationship between AMSOIL and the talented builder Chris Mangum.
The latest project for Chris and DSO Eyewear is his 2011 Honda CR-Z Sport Hybrid, making its third appearance since SEMA 2010 and the LA Auto Show at the San Diego Auto Show last weekend. Sharp enough to land a spot as the main attraction in the Honda booth and sitting on 19" wheels, Chris’ CR-Z shows how much influence the west coast automotive scene has provided him. Extensive modifications from some of the best aftermarket companies in the world round out every detail to make the 2011 CR-Z the stunner it is today, with AMSOIL fluids keeping it humming. From the chassis, suspension and carbon fiber hood to the custom two-tone paint job, nothing was overlooked in creating this high precedent for the next generation of the Honda CR-Z. It’s these kinds of builders that turn to AMSOIL for their lubrication needs because when it looks that good on the outside, it has to perform just as good on the inside.
Posted by AMSOIL INC. at 1:47 PM