Hot Rod Drag Week is anything but a drag... 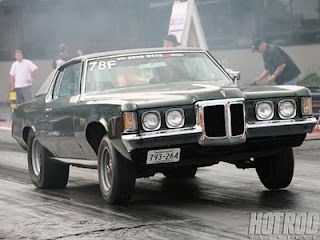 In addition to the car shows, the AMSOIL Mopar Muscle Engine Challenge, this was also Hot Rod Drag Week... and pretty exciting at that. Drag Week has been described as the Road Tour on Steroids.

Day one took the racers to National Trail Raceway in Hebron, Ohio where HOT ROD’s Drag Week officially began with the drivers meeting at 9:00 a.m. The racing action heated up immediately. In the race to the first 6-second pass in Drag Week history, Larry Larson and his silver and purple Chevy II posted a 7.12 at 189 mph time, while Jeff Lutz’s black ’57 Chevy ran 7.41 at 179. Then they packed up and hit the highway to O’Reilly Motorsports Park in Indianapolis, Indiana for day two.

HOT ROD Drag Week was scheduled to run at the historic O’Reilly Motorsports Park in Indy, home of the NHRA U.S. Nationals, a few years ago but they got rained out. The participants all wanted to come back, so that’s where they went for day 2. The weather was perfect and the performances were amazing, as was the carnage. A group of Australians blew the engine in their ’71 Chevelle and spilled oil all over the track, then performed a quick engine change with a long-block from a local O’Reilly's store and got back on the road. Amazing.

Yesterday's action was at Milan Dragway in Milan, Michigan. The day started off wet but the track at Milan was dried and the cars began running at about 11:30 a.m. It’s a long drive to Pittsburgh Raceway Park, site of Day 4 of HOT ROD’s Drag Week. For all the latest results and more photos, go to HOTROD.com/dragweek.
Posted by AMSOIL INC. at 2:56 PM