The engines arrived safe and sound, and the teams were on hand for the AMSOIL Mopar Muscle Engine Challenge yesterday at Comp Cams in Memphis. You can see from the pictures that they are already hard at it. 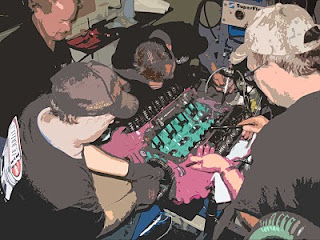 Up first was Schurbon Engine and Machine, last year’s winner with Scott Schurbon eager to retain his title. According to editor Randy Bolig, "Scott, Bob Seigwarth, and Larry Griffen had a large challenge facing them, as they planned to do a cam and intake swap during their allotted time. With a small block Mopar, that’s a daunting task." After their Third qualifying pull, the thrash was on, and the parts swapping began. They made it with time to spare, but the results weren’t what they expected. Power and torque were down after the swap, but there wasn’t enough time to change it back. 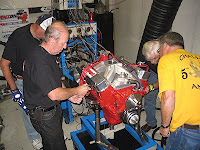 Next on the dyno was the team of Chenoweth Speed & Machine and LaRoy Racing Engines. Right after the engine was fired up, something didn’t sound right. Apparently there was a dead cylinder, and water was running out of the left header. This was definitely not a good sign. After some thought, it was determined that they would not continue on for risk of damaging the engine. Perhaps we will get a full report once the engine has been torn down.

Tuesday will start off with Mid-America Racing Engines in the morning and then MRL Performance. We'll keep you posted.
Posted by AMSOIL INC. at 10:18 AM