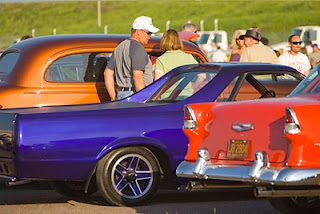 The 2010 AMSOIL Street Rodder Road Tour recently completed the 4th tour of the season and, as always, it ended on a high note. The Factory Five Racing Tour kicked off July 18 at the Factory Five Racing complex in Wareham, MA. Almost 20 vehicles were behind Dixey as the tour made its way down the East Coast to its final destination at the Syracuse Nationals in NY. After an in-depth tour of the facilities at their open house at Factory Five the tour began winding its way towards Cape Cod, where the group was led by motorcycle legend Dave Pererewitz on a tour of the Plymouth Rock area. The cruise led them to the original Plymouth Rock and a replica of the Mayflower for an opportunity to see a piece of American history. Whistle stops at local restoration shops DMC Racing in Halifax, MA and Perewitz Cycle Fabrication marked the beginning of the week-long tour. 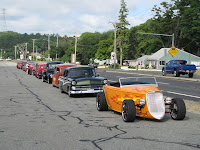 Monday brought a full day of activities, with the first stop bringing everyone to the USS Albacore submarine near downtown Portsmouth. Built in 1952 for the Navy, it was the first submarine with a cylindrical hull that is now the standard shape of today’s modern submarines. From there it was on to Strawbery Banke village and museum, where the collection of buildings dates back to the earliest settlers of New England and represent life as it was in the early days of Portsmouth. After leaving and enjoying a ride through the New Hampshire countryside, the crew landed at New Hampshire International Raceway in Loudon, NH. As one of the trip highlights, they were permitted to make a few laps around the road course and put their vehicles through the track paces. After, it was onward towards NY with a couple more stops at some well-known restoration shops: Lowery’s Auto Restorations in Tilton, NH, Rolling Bones Hot Rod Shop in Saratoga Springs, NY and Tucci Engineering in Marcy, NY. All three shops are well-respected in the street rod industry, and each received the tour with a warm welcome.
Finally, the tour landed in Syracuse, NY, its final destination being the Syracuse Nationals. Already in full swing by the time they arrived, the Road Tourians enjoyed activities such as a demolition derby, figure 8 racing and nightly fireworks. The tour wrapped to everyone agreeing on the great turnout and events, with hopes for participation in future tours.
AMSOIL is proud to be the sponsor of this exciting annual excursion, and there is still time to join any of the remaining four tours for 2010. If you or someone you know drives a street rod, don’t miss the chance to be a part of this excitement-filled, head turning tour as they travel the country throughout the summer.
The Intercity Lines Tour: July 30 - August 8
Los Angeles - Street Rodder Magazine offices
To
NSRA Street Rod Nationals - Louisville, Kentucky
The Dynamat Tour: August 8 -16
NSRA Street Rod Nationals - Louisville, Kentucky
To
Bonneville Speed Week - Wendover, Utah
The Canadian Classic Cars Canada Tour: September 10 - 19
NSRA Nationals North - Kalamazoo, Michigan
To
NSRA Northeast Nationals - Burlington, Vermont
The Sherm's Plating Tour: Oct 9 - 17
Sacramento, CA -Sherm's Plating
To
The NHRA California Hot Rod Reunion - Bakersfield, CA
Posted by AMSOIL INC. at 8:37 AM