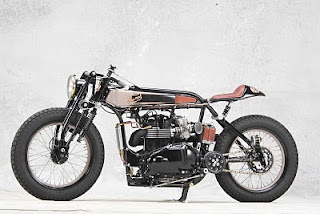 Jeremy Cupp, President of LC Fabrications, has been on the AMSOIL radar for quite some time now. In February 2009 his custom-built Panster won the Editors’ Pick for best in show at the Easyriders Invitational and his TT Deluxe was honored with the VQ award at the same event. The VQ is equivalent to an Emmy in the world of motorcycling, and Cupp is well-deserving of such an award. With acute attention to every detail on his custom builds, Cupp can start with practically nothing but the parts lying around in his garage and turn it into an original bike unlike anything else in the world. AMSOIL has featured some of his works in national advertising, and each build never fails to turn heads. 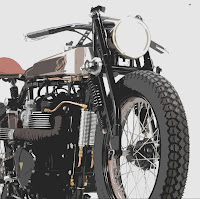 Cupp’s innovative mind has led to the creation of several custom bikes, each with their own stamp of originality. From the leatherwork to the frame, fender and bolts in between, Cupp tweaks each part until it fits his vision. He uses AMSOIL exclusively in each build to ensure the engine can take the many miles ahead of it when it hits the road. In addition to the Panster and TT Deluxe (left) that have already made the rounds on the bike scene, Cupp has poured his talent into a custom Bonneville-style bike named ‘Bonnie’, the Birmingham Bee-Liner, and the one that started it all, the Outcast. His website showcases each and tells the stories of how they came to life.

Never one to worry about the fame and fortune that comes afterwards, his pride comes from the end result of a job well done. Whether a simple build or one more complex, Cupp states in his own words, “It’s not about being better than the next guy or spending a fortune on paint, it’s about the need to create, the love for anything mechanical, and having a true passion for what you do.” It’s these beliefs in his own passion and talent that will catapult him to even higher success, and AMSOIL looks forward to being there with him each step of the way.

The TT Deluxe featured here will be on display at the Triumph annual dealer's convention in Orlando Mid-February.
Posted by AMSOIL INC. at 11:16 AM