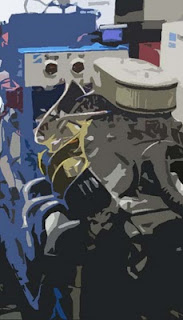 A few weeks back AMSOIL announced the title sponsorship of the 2010 Engine Masters Challenge in conjunction with Popular Hot Rodding Magazine. This event puts over 30 talented engine builders in one place to see who can build the most cost effective, efficient engine. After a series of dyno tests that measure torque, horsepower and performance the top engine builder is ultimately crowned 2010 AMSOIL Engine Master. With many contingency sponsors and $5,000 in cash and prizes going to the winner, the stakes are high. Like a Super Bowl ring, though, the real prize is the recognition it brings.

If you or someone you know has a talent for engine building, it's not too late to apply to be a participant in this challenge. Applications are due no later than February 15th, so now is your chance to be part of this exciting event and show your stuff. Full rules, details and application can be found here on the Popular Hot Rodding website.
Posted by AMSOIL INC. at 2:54 PM