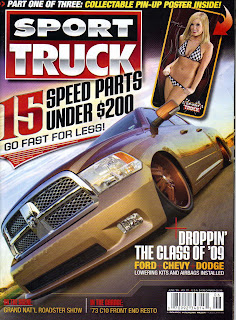 The Dodge Ram is generally not the go-to for custom truck builders, but Mitch Rall of Ektensive Metalworks was one of the first to make a project of it when word of the new-style Ram was announced. Indeed, it was a labor of love that paid off in full with great results. A longtime fan of Dodge trucks, Mitch has owned both body-style trucks prior to this one.

We first caught up with Mitch as he was preparing for the SEMA show in 2008, where the truck was featured in a special Mopar booth. Fully equipped with AMSOIL lubricants, Mitch’s 2009 Dodge Ram 1500 Crew Cab has turned quite a few heads including the folks at Sport Truck magazine. Featured on this month’s cover, this custom truck is definitely out of the norm. Ektensive Metalworks is known for dropping trucks down over big wheels, and this one is no exception. 26x10 Giovanna Canelli wheels with Toyo Proxes STII tires made this goal a reality, and a custom paint job in dark gold and subtle champagne round out the effect. Attention to detail was given to the entire build, right down to the matching rims.

A family man with a wife, daughter, and son on the way, Mitch uses this truck as a daily driver as well. Aside from a few interior pieces being painted to match the exterior, the only big change there is in the sound system. A Rockford Fosgate system installed in the doors and behind the rear seats completes this one-of-a-kind build.

Be sure to pick up a copy of the mag to see the six page spread with photos and other details. It's one beautiful ride.
Posted by AMSOIL INC. at 9:16 AM