AMSOIL is gearing up for another sponsored event in Bowling Green, Kentucky, May 10-12, in partnership with Diesel Power Magazine. The 2009 Diesel Power Challenge pits competitors against one another to find out who has the ultimate street-legal diesel powered vehicle. In a series of events geared towards bringing out the muscle in each of these trucks, diesel fuel must be the primary fuel source during all events. However, modifications, turbochargers, and additives such as nitrous oxide and propane are not only allowed but encouraged.

Over the course of three days the following events will determine whose build has what it takes, but only one will emerge title holder of the Ultimate Diesel-Powered truck.

Day 1
Registration, inspection, and photo shoot for inclusion in an upcoming issue of Diesel Power Magazine. 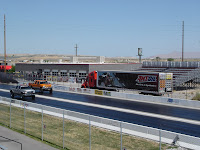 Drag Racing: Each competitor will be given an hour on a speedway to make as many quarter-mile passes in their trucks as possible. The driver who completes the fastest quarter-mile pass will be determined as the winner.

10,000-lb 1/8-mile Trailer Tow: Competitors will attempt to tow a 10,000 pound trailer for a 1/8-mile acceleration run. Each driver is only given one shot, and the truck that completes this in the quickest elapsed time will win this event.

Chassis Dyno: The highest torque output numbers, determined by the operator, will determine the best in this category.

Day 3
100-Mile Fuel Economy Drive: A test in road-worthiness and best fuel economy, this event proves it’s not only about strength and power. After all trucks have been topped off in fuel, a Diesel Power official will lead the group on a 100-mile loop to gauge the fuel economy in each. After 100 miles, the official will top off the fuel again and determine which truck used the most gallons. The truck with the least amount of used fuel will win this event.

Sled Pull: The final leg of the competition is a test in both strength and endurance. Each competitor will attempt to pull a sled for the longest distance, and the top three pullers will then compete for first, second and third place in a pull-off.

After all events have been completed, judges will tally up the scores from each event to determine which truck and driver is worthy of being crowned winner at the trophy ceremony. In addition to being covered in an upcoming issue of Diesel Power Magazine, you can look for the Diesel Power Challenge DVD later this fall. Watch this space next week for results and photos from this years’ Diesel Power Challenge competition.
FILE PHOTO ABOVE IS FROM 2007 EVENT IN SALT LAKE CITY
CLICK TO ENLARGE
Posted by AMSOIL INC. at 2:38 PM