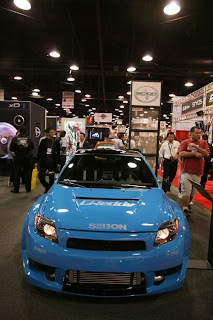 "If your actions inspire others to dream more, learn more, do more and become more, you are a leader." ~ John Quincy Adams

John Pangilinan is no stranger to winning car builds. His first project car, a 2000 BMW 3-series, won over 40 awards, including NCCA Best BMW nationwide in 2003. The BMW gained national and international media coverage that included magazine features in over a dozen titles with numerous covers. From the start his work became a source of inspiration for other builders.

At the 2008 SEMA Show earlier this month Pangilinan’s AMSOIL lubricated, hot blue Scion won 1st place in the annual Scion Tuner Challenge. The award consists of a trophy, gear from Sparco, and $10,000 cash.

The car will be at the upcoming LA Auto Show and Detroit Auto Show. After that, the Scion will go tour across the country for various events as a display vehicle. It will also be featured in Max Power UK and Modified Magazine with details on the build.

Pangilinan, a veteran builder with 8 years under his belt, knows that a winning build requires both styling and performance. Thanks, John, for recognizing the contributions AMSOIL synthetic motor oils and drive train fluids can make toward achieving your endgame.
Posted by AMSOIL INC. at 2:40 PM