For a cool story about a hot Subaru, check out the May 2008 issue of Import Tuner Magazine. The six page feature story, "God Don't Like Ugly," begins on page 76. The cover shot is especially sweet with the AMSOIL logo prominent enough, and more so inside.

Ad Age online describes the tuner scene in this way:

"Tuners: They're young, auto-savvy trendsetters willing to spend money customizing or 'tricking out' their cars. It's a Fast and Furious crowd, an urban, hip-hopping car culture with a contemporary twist on the baby boomers' muscle-car era of the 1960s that has inspired everything from specialized magazines to movies and video games." 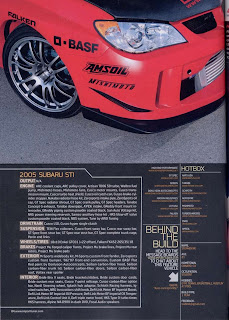 Import Tuner is one of the leading magazines covering this sector. Some of the hottest tuner cars are listed below.

The demand for high-performance modifications continues to remain strong, fueled by countless new products, technological developments, and raging dedication and excitement among its dedicated tuner customer base. It's fun to see AMSOIL in the thick of it.
Posted by AMSOIL INC. at 3:20 PM