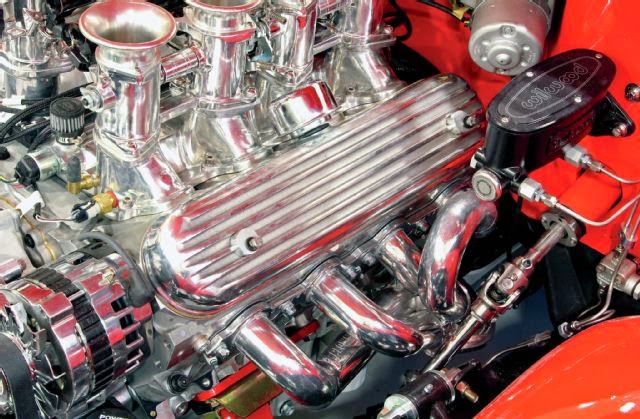 The power output was outstanding, with peak output recorded at 738 horsepower and 653 lb-ft of peak torque. The engine’s score was hurt by a dip in the torque curve right at the bottom of the rpm range, but the final tally of 2720.4 was enough to put Shaver among the leaders. By week's end another engine builder walked away with the trophy, but no one takes anything for granted when a Ron Shaver engine is in the room.

Well, this year Shaver's name came up in conjunction with another AMSOIL-sponsored relationship, the AMSOIL Street Rodder Road Tour. The Road Tour's '59 Chev Impala is a big car, and it needed a big engine. Road Tour director Jerry Dixey says it has been tremendously fun to drive. Furthermore, it has enough trunk space to accommodate "a small college  marching band" (if they leave out the tubas.) Dixey has driven a few road tours with almost no trunk space, so the extra room is welcome. It's not easy packing a week's worth of attire into a glove compartment.

The power behind this year's car came from a Ron Shaver-built 427 big-block LS with EFI. He said the engine would fulfill all the prerequisites of big power, be very streetable, and still be enticing to the eye. "We're here to tell you this big dog hunts on all counts," says Dixey, "The old standard for a street performance engine used to be 1.1 horsepower per cubic inch (hp/ci). This RHS block–based 427 blows that out of the water with an impressive 1.45 hp/ci with its 622 hp peak."