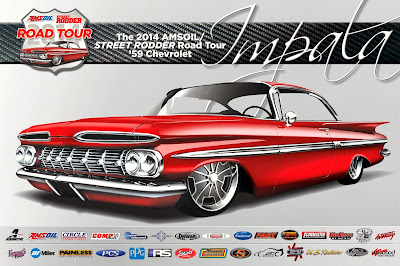 Tomorrow Hot Rods by Dean will have the 2014 AMSOIL Street Rodder Road Tour car on display at its 7th annual open house for Goodguys Scottsdale in Arizona. Award winning builder Dean Livermore was selected earlier this year to build the '59 Chevrolet Impala for the 2014 tour.

The RT14 '59 Chevy is in guide coat (last step before final bodywork and paint) and will remain in this condition until around Christmas. There are a number of smaller projects such as exhaust, powdercoat chassis, etc. that need to be finalized before the final paint job can be applied. It will be a gorgeous car for road tour rockstar Jerry Dixey to drive this year. Said Dixey, “I'm really excited about our 1959 Impala Road Tour car for 2014. The 1959 and 1960 Chevrolet body style was a radical change to the traditional automotive styles of the 1950’s. The Hot Rods by Dean built car will be a wolf in sheep’s clothing with a potent Ron Shaver-built LS motor under the hood, the whole package rolling on an independent front and rear suspension chassis from the Roadster Shop. I can’t wait to see the USA in our 1959 AMSOIL Street Rodder Road Tour Chevrolet.”

The open house will be in conjunction with the 16th annual Southwest Nationals, penultimate car show for Goodguys. The open house has drawn as many as 1,500 cars in the past and Dean brings in a catering team to make rodders burgers.

Currently the Impala is sitting on its frame and will have signage alongside during the open house. After the open house plans call for another concerted effort to have as much done as possible by the end of January. Rumor has it that the car might get a little eyeball time during a Source Interlink party during the MPMC show, then moved to the GNRS Show the end of that month. This last bit is all on the hush hush right now, if you know what I mean.

For now, 2014 seems to be shaping up to be another great year for the AMSOIL Street Rodder Road Tour.
Posted by AMSOIL INC. at 9:48 AM

Why is it that the Power Tour can announce their tour and schedule a year in advance and Street Rodder cant get their act together until January or February with the first tour going off in May or June. Many working folks must ask for vacation for the coming year prior to the end of the current year. Seems you could accommodate a lot more people with some advance planning.

Thanks for the question. Perhaps Jerry Dixey, who runs the Road Tour, can answer that if you send him a note through the magazine, but I am guessing it goes something like this... The initial starting points and finishing points get selected, and then sponsor of the individual legs are sought. Every day of each of the 8 legs of the tour has activities that must be arranged. Jerry works hard to find interesting car collections, destinations, etc. for the tour folk to enjoy along the way. The Power Tour is a single week, and much easier to organize and prepare for.
Perhaps this suggestion could be made, that the Big Picture (8 legs) be announced as early as possible with the details to come.
I know that the Street Rodder Nationals in Louisville is always a destination and a starting point for two legs of the tour. Let's see what Jerry has to say though.
Glad you are care enough about this to ask.

Thanks for your interest in the AMSOIL/Street Rodder Road Tour program. As many folks already know we put togther eight week-long tours that start at an event and spend a week on the road visiting shops, private collections and facilities of many of our great Road Tour sponsors. We always end the week at another large automotive happening. It is a planning process that does take a while to coordinate. The good news is that we now have the 2014 schedule set. In a few days the dates and beginning and ending events will be at the AMSOIL/Street Rodder Road Tour section of our website www.streetrodder.com. Our friends at AMSOIL will also be posting our schedule in a blog very soon. Folks can also contact me directly on the Road Tour Hotline at 1-800-664-1362.It is going to be another great summer on the AMSOIL/Street Rodder Road Tours. Thanks to all of our sponsors who make this program possible.