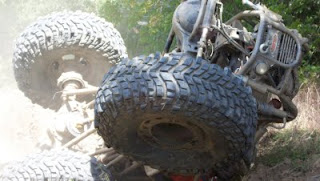 The Top Truck Challenge was established 19 years ago, and has been steadfast in keeping with the original idea of pushing 4x4’s to their ultimate limits in Hollister Hills, CA. The Top Truck Challenge is a grueling week-long competition that tests the mettle of some of the toughest trucks and drivers in the country. AMSOIL has been the Official Oil of the Top Truck Challenge for several years, which provides an excellent proving ground to show what AMSOIL lubricants are capable of handling. Hollister Hills is a Mecca for off-road and dirtbike enthusiasts, with over 4,000 acres of terrain designed for every skill level.

Selected by readers of Four Wheeler Magazine, competitors in the Top Truck Challenge are pitted against one another in a series of extreme off-road events over the course of 4 days. Aptly named challenges such as the Tow Test, Frame Twister, Mid Pit, Obstacle Course, Hill Climb, Mini Rubicon and Tank Trap claim some of the mightiest rigs. While each of the events plays a part in taking competitors out, the Tank Trap is known as the ‘crown jewel’ of the Top Truck Challenge. This event in particular is aimed at pushing each truck to its limit as they face unrelenting obstacles while the clock works against them.

The TTC is filmed and aired on national television later in the year, but AMSOIL is on site and will be providing exclusive updates throughout the week. You can also read our previous blog post here to meet this year’s competitors and decide who you think will be crowned the winner in 2011. Be sure to check back often throughout this week for a sneak-peek into what is going down in Hollister before it airs, and find out who will win the battle in the 2011 Top Truck Challenge.
Posted by AMSOIL INC. at 9:15 AM