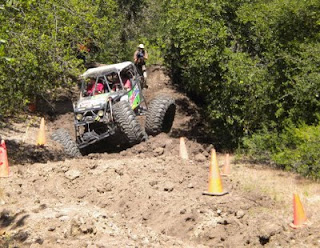 The second day of the Top Truck Challenge wrapped up on Wednesday, and it didn’t go without a hitch. Competitors were introduced to the Obstacle Course, Hill Climb and Mini Rubicon events. AMSOIL Technical Powersports Manager Len Groom provided us with another update straight from Hollister Hills, and reports this years’ event isn’t holding back any punches. Judging by the pictures, these rigs are facing some extreme obstacles as they make their way to through each event and try to remain in the competition.

The Obstacle Course held plenty of surprises for competitors as they attempted to clear it. Deep water and deeper holes proved this to be extremely difficult, catching some of the drivers on the ledge causing them to roll. Despite the challenges the competitors faced, most made it through to face the next challenge-the Hill Climb event. 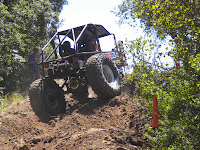 The Hill Climb is a 60° slope with holes and ditches dug throughout, aimed at either flipping the rigs over or stopping them completely. There is no stopping or backing up in the Hill Climb event, momentum must be maintained while dodging the treacherous terrain at the same time. On a hill that’s difficult to even stand on, let alone drive, most drivers were able to clear it though there were a couple of rollovers.

Up next we saw the Mini Rubicon, one of the most challenging events in the Top Truck Challenge. The proving ground for this event was bigger than in years past, and producers made sure it wouldn’t be easy. In addition to deep holes, giant boulders were placed throughout to ensure some broken parts at the end of the day. In spite of all the hurdles, the Mini Rubicon didn’t take out any competitors and they were all able to move on to the dreaded Tank Trap on Thursday.
The winner of Top Truck Challenge will soon be announced. Be sure to check back later for the next update on what went down in the Tank Trap event, and who won the battle in Top Truck Challenge 2011.

CLICK IMAGES TO ENLARGE
Posted by AMSOIL INC. at 9:32 AM