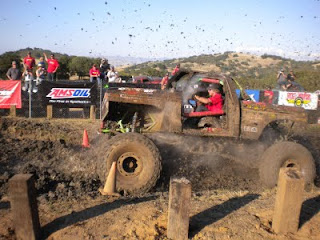 We just got a report from AMSOIL Powersports Technical Product Manager Len Groom, who is live on the scene of the 2011 Top Truck Challenge in Hollister Hills, CA. The challenge kicked off Tuesday, with the competitors being introduced to the 2011 event by the Tow Test, Mud Pit and Frame Twister events. While the Tow Test claimed only a broken driveshaft on a buggy, the Frame Twister lived up to its name and kept most competitors from even finishing. The Frame Twister event is a formidable proving ground filled with holes, rocks and logs aimed at taking out these monstrous trucks with little effort. Len Groom reported that is was the most demanding Frame Twister yet and summed up what has been seen so far in one word: Tough. 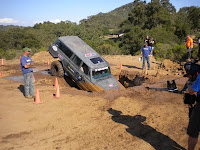 After numerous extractions and broken parts in the Frame Twister, the challenge moved on to the Mud Pit event. These rigs don’t typically do well in this type of sludge but competitor Mike Keller (pictured) hit the mud flying and skimmed along the top, making it look easy. We are now in Day 2 of the 2011 Top Truck Challenge, which will see the competitors battle the Obstacle Course, Hill Climb and Mini Rubicon. Judging by the photos we have received thus far, things are just getting good.

Who will emerge victorious in the 2011 Top Truck Challenge? Be sure to check back for more photos, updates and quotes directly from the competitors in the thick of it.
Posted by AMSOIL INC. at 2:59 PM