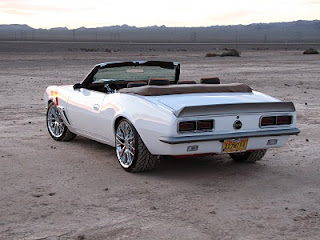 Back in September AMSOIL was approached by John Wargo of The Custom Shop as he was preparing his 1968 Camaro Convertible for the SEMA show in Las Vegas. As his project came together, he wanted to be sure the lubricants met the same standards he laid out for the rest of the build. AMSOIL accommodated his request and jumped on board as a product sponsor. Coined the Grand Sport Super Sport, the Camaro was a feature vehicle at SEMA with Holley Performance. It has since been making rounds generating steady media coverage with various photo shoots, including one at the famed Bonneville Salt Flats. 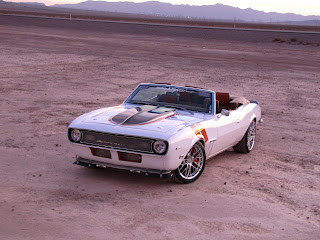 In the planning phases John and crew envisioned a high-end performance Camaro with a Corvette theme, intended to bring the muscle car and Corvette enthusiast together. Completing the vision from the original 1968 Camaro to the end result took about 10 weeks. With the exception of seat stitching and installation of the convertible top, all work was done in-house at The Custom Shop. Body modifications include a custom cowl hood, mesh grill, air ride system, with custom tail lights and exhaust system. Interior mods are also extensive, from the custom audio/video system with matching panels, to the interior panel kit and custom pedals on the floor. The custom show paint job with Pearl White color shift base, airbrushed with graphic design matches the carbon fiber and orange pearl theme to round out the completed design.

The Custom Shop spared no time or effort when it came to creating the end result as John envisioned it. AMSOIL is pleased to be a part of this project and looks forward to future updates on the Grand Sport Super Sport from The Custom Shop.
Posted by AMSOIL INC. at 3:54 PM